Following a successful period of training at Rush Green, the French midfielder has joined the Hammers on an initial contract until the end of the 2018/19 season, with the option to extend his stay in east London.

A creative and technically-gifted player who impressed hugely during spells with Marseille, Arsenal, Manchester City and Sevilla, Nasri is available to play again after a 12-month ban and is ready to restart his career in a Claret and Blue shirt. He will wear the No18 shirt.

Check out seven things you might not know about Samir Nasri here!

“You choose a club and a project because of the ambition, and I think that West Ham has everything to be one of the biggest clubs in London, for sure. I mean, 60,000 people every game at home. We play in the Olympic Stadium. The training ground is there and you have owners who wants to invest and have a good team. Everything is there to be doing great things

“Coming back to the most competitive league in the world, with a team full of ambition with a manager that I know. It’s the best job in the world, and I’m really excited about it” said Nasri.

You choose a club and a project because of the ambition, and I think that West Ham has everything to be one of the biggest clubs in London.

Manuel Pellegrini managed and won a Premier League title with Nasri at Manchester City and has spoken previously of his desire to make the addition of a proven top-class performer to his squad.

Commenting on Nasri, he said: “I am very pleased to welcome Samir to West Ham United. He is a player I obviously know well from our time together at Manchester City and I am happy to be working with him again. He has been working very hard here in recent weeks to build up his fitness and condition after a long period without playing, and he is now very determined to return to his best. 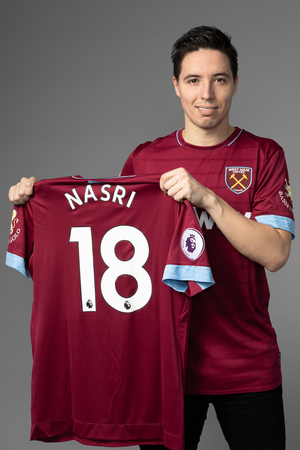 “Samir will give us another dimension in our attacking play. He is a very technical player, with excellent quality on the ball, and the ability to create big moments in important matches. He already has very good experience of the Premier League and we hope that he will have a positive impact on the team between now and the end of the season.”

Born in June 1987, Nasri joined Olympique Marseille at the age of ten and honed his considerable talents at the club’s famed Bastide youth academy.

After making his debut for Marseille’s reserve team at 16, the promising teenager made his senior bow in a Ligue 1 meeting with Sochaux in September 2004, aged 17 years and three months. The following year, he won the UEFA Intertoto Cup.

Nasri totalled 166 appearances across four seasons at the Stade Velodrome, including 28 in European competition, and was voted UNFP Ligue 1 Young Player of the Year in 2007.

Arsenal brought Nasri to England in July 2008 and he excelled over three seasons in north London, scoring 27 goals and registering 16 assists in 126 games, while also being named in the Premier League Team of the Year in 2011.

That form saw Manchester City add him to their star-studded squad in August 2011 and he marked his first season at the Etihad Stadium by scoring a number of vital goals as the Citizens won their maiden Premier League title.

Nasri remained a central figure following Manuel Pellegrini’s arrival in 2013, adding a second Premier League winner’s medal and producing a Man of the Match performance as City won the EFL Cup in 2014.

The exciting Frenchman was also capped 41 times by his country, scoring five goals and appearing at the 2008 and 2012 UEFA European Championship finals. Prior to that, he scored the winning goal as Les Bleus won the UEFA European U17 Championship title in 2004.

West Ham would like to welcome Samir and his family to the Club and wish him all the best for his career with the Hammers.