Analysis: Resilient Rice has shown age is no barrier 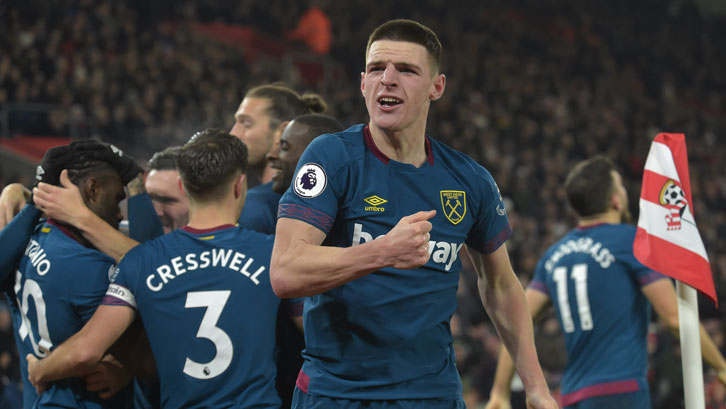 Declan Rice has undoubtedly proved the old football adage that ‘if you are good enough, you are old enough’ since breaking into the West Ham United first team at the age of 18.

The outstanding young Hammer’s multitude of qualities have been apparent to anyone who has worked with him since his arrival in east London as a 14-year-old schoolboy in 2013.

A technically-gifted, strong, versatile and composed all-round performer, Rice has shown age is no barrier to achievement, starting 28 of the Irons’ last 32 first-team matches and becoming the first West Ham player since Michael Carrick to pass 50 first-team appearances while still a teenager.

After an outstanding 2016/17 season with the U23s which culminated in him captaining the side to promotion to Premier League 2 Division 1, Rice was handed a senior debut at Burnley on the final day of the Premier League campaign. Unsurprisingly, he did not put a foot wrong, completing all six of his passes to help the Hammers secure a 2-1 victory.

The 2017/18 campaign proved to be a more challenging one for both player and club. A poor start to the season saw the manager who handed Rice his debut, Slaven Bilic, replaced by David Moyes, and Rice himself left out in favour of more experienced teammates.

However, Rice showed admirable resilience, forcing his way back into Moyes’ starting XI and impressing at centre-back in a hard-fought 2-1 defeat at Manchester City in December 2017.

Over the next six months, the Scot would field the teenager in a host of positions, including right-back, left-back, centre-back and deep-lying central midfield, and the No41 responded with a succession of unruffled displays that again belied his tender years.

It is testament to his ability and attitude that Rice started and finished West Ham’s final eight matches of 2017/18, all at the heart of the defence. Only two of those eight games ended in defeat as the Hammers surged to Premier League safety, with the rookie earning widespread praise from his manager, teammates and supporters alike.

In 31 appearances in all competitions last term, totalling nearly 1,900 minutes of action, it is telling that Rice was shown just one yellow card.

Another test came at the start of the current campaign, when a humbling opening 45 minutes at Anfield saw the teenager replaced at half-time by new manager Manuel Pellegrini.

No matter, as yet again Rice illustrated his calm, unflappable character by getting his head down, working hard on the training pitch and regaining his starting place for the 2-1 win at Everton that kicked-off West Ham’s autumn renaissance.

Playing as a deep-lying central midfielder, Rice has been the steering wheel which has driven the Hammers into the Premier League’s top ten at the season’s halfway stage, ranking second in passes attempted and fourth in both touches and tackles made.

He may be young in terms of age, but the numbers show Declan Rice is a vital part of West Ham United’s future.