Pellegrini: We can continue improving in the second half of the season

Manuel Pellegrini has challenged his West Ham United team to continue getting better after Thursday evening’s 2-1 win away to Southampton.

Two excellent goals from Felipe Anderson secured a fifth win in six Premier League matches for the Irons, pushing them up to ninth in the table.

Having claimed 27 points in the first half of the season, Pellegrini is satisfied with how his team have performed, and now wants the Hammers to do even better in the second portion.

In this moment, we are in the top ten. We will continue fighting and improving.

“I’m happy,” Pellegrini said. “When you start with zero points in 12 then it’s always difficult to recover your position in this way.

“In this moment, we are in the top ten. We will continue fighting and improving and, with 27 points, in the second round, we continue improving with our winning mentality, and we try to finish the season as near the top of the table as we can.”

The Chilean was delighted with his side’s overall showing at St Mary’s Stadium, despite West Ham going a goal behind early in the second half.

He continued: “I thought we played a very good game. From the first minute, we had the intention of winning the game and I thought we were very balanced in the whole game.

“We worked most parts of the game in our opponent’s side and we defended very well. They didn’t have many options.

“The important thing [when Southampton scored] is we continued to play in the same way, draw the game immediately, and then we scored the winning goal.” 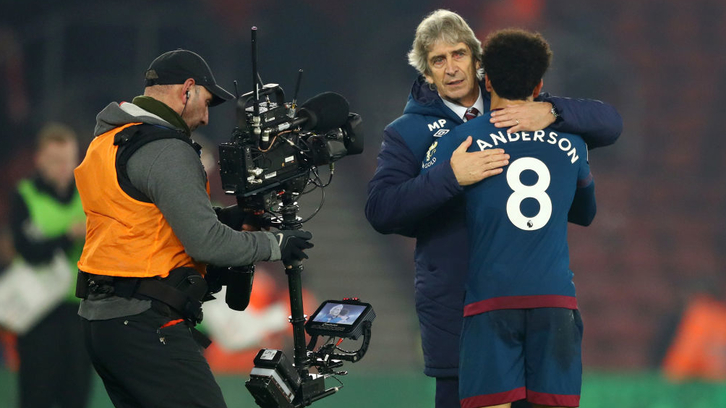 With Felipe Anderson netting twice, the Brazilian moved up to eight Premier League goals for the campaign.

Pellegrini has now challenged the 25-year-old to be even better than his current form, although the manager is delighted with how the club’s record signing is performing.

“He’s a different player,” Pellegrini added. “He’s a player that makes important things in every game.

“I continue to think that he will continue to improve. He’s still losing too many balls; maybe he needs to understand that it’s not easy in the Premier League.

“But in every game, he makes a difference, with important play.”