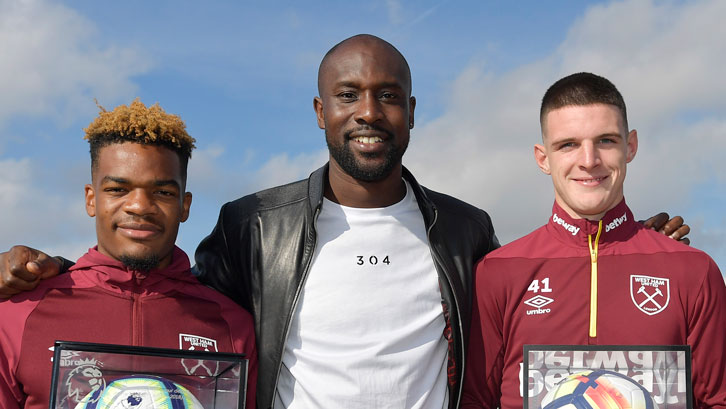 Jack Collison has welcomed Carlton Cole back to West Ham United in a new role mentoring the club’s scholars and schoolboys.

The former teammates have been reunited at the Academy of Football, where Cole will provide support to Collison and his fellow U18 coach Mark Phillips, working with the Hammers’ promising youngsters on and off the pitch.

The ex-West Ham and England centre forward was also in the dressing room for the recent FA Youth Cup and U18 Premier League fixtures with Brighton & Hove Albion, offering advice and spreading a positive message with his trademark enthusiasm.

Hopefully the boys will enjoy being around Coley, will build relationships with him and his positive influence and experience will rub off on them

“Carlton has come back to the club and although he is fairly fresh in terms of his coaching, one thing you cannot teach is the years of experience he has of playing at the top level,” Collison explained. “To have his input and help in and around a few of our individuals will be massive.

“Coley was always such a massive character in the changing room and straight away he has brought in that positivity and that banter.

“Hopefully the boys will enjoy being around Coley, will build relationships with him and his positive influence and experience will rub off on them.”

One player who is already enjoying a productive relationship with Cole is second-year scholar Sean Adarkwa, who recovered from the disappointment of missing an FA Youth Cup shootout penalty in the defeat by Brighton by scoring both goals in the Hammers’ 2-2 U18 Premier League draw with the same opposition.

Cole has been speaking to the centre forward regularly, both in person and by text message, offering the support the 18-year-old needs to make the most of his talents.

“Sean is one of the players Coley has started working with on an individual basis and he is definitely one who has seen an immediate benefit of that one-on-one relationship,” Collison confirmed. “He’s had a really good couple of weeks.

“Sean is a No9 of a similar build to a young Carlton, with similar attributes, so hopefully this is the start of a really productive relationship which help Sean to progress.

“It’s not just about being out on the training pitch and doing extra finishing and stuff like that, but a holistic approach which will see Coley work with the lads as a mentor, offering advice and sharing his experience.

“We want to offer the boys a real platform to grow and progress from and having Coley’s wealth of experience around the place can only help them, so we’re looking forward to having him around the place as much as possible.”