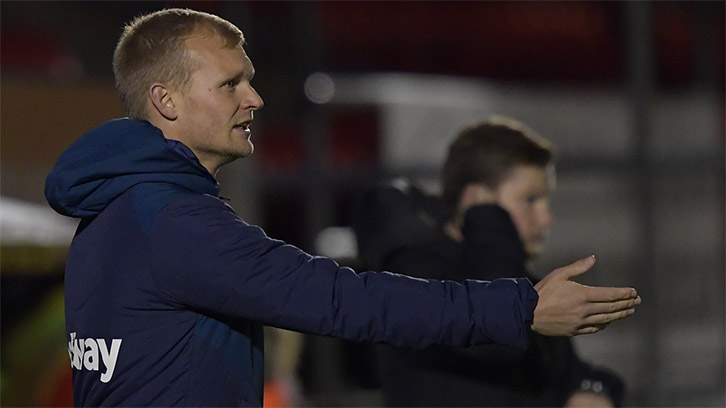 Liam Manning believes his West Ham United U23s’ team’s failure to win their individual battles all over the pitch in Tuesday’s 3-0 defeat to Southampton cost them in the Premier League International Cup.

Two first half goals in quick succession from Tyreke Johnson and Marcus Barnes were followed by an unfortunate Nathan Trott own goal after the break to end the Hammers’ hopes of progressing to the quarter-finals.

After the east Londoners played so well on Friday, albeit in a 3-2 defeat to Chelsea at Aldershot Town, Manning was particularly frustrated with the performance on Tuesday and explained what went wrong on the south coast.

He said: “We were extremely disappointing. There wasn’t a huge amount in the game to begin with. They were obviously well set up and well drilled and organised and that’s what we said to the lads, and that’s what you get week in, week out at a higher level.

“But then we gave away some more goals and at some point we have got to learn that we can’t do that, but it’s happening weekly at the minute.

You have to earn the right to play by running harder than the opposition, competing in the 50-50s, the not so glamorous parts, and we didn’t win enough of them all over the pitch.

“I think the starting point in any game, in any league in the world, are the non-negotiables. That’s the case wherever you play. You have to earn the right to play by running harder than the opposition, competing in the 50-50s, the not so glamorous parts, and we didn’t win enough of them all over the pitch, the battles all over.

“Ultimately, you have got to earn that and we didn’t do that. We didn’t come out in seven or right of the one-v-ones that you need to do to control a game and as a result, we didn’t get the control and you’re not going to win football matches like that.”

One of the positives for the Hammers was another U23 appearance for 15-year-old winger Amadou Diallo, who has now played twice in the competition for the Irons.

The exciting youngster has featured on the bench several times for the Premier League 2 outfit and Manning believes the teenager will be better from his experiences this campaign.

“It’s a terrific lesson for Amadou who was at Chelsea with us on Friday and then he was here and came on tonight,” the coach continued.

“He saw a real positive side last week and then a not-so-positive side now. That’s a great learning curve for him and he has to make sure he uses that and continues to kick on and work hard every day.”