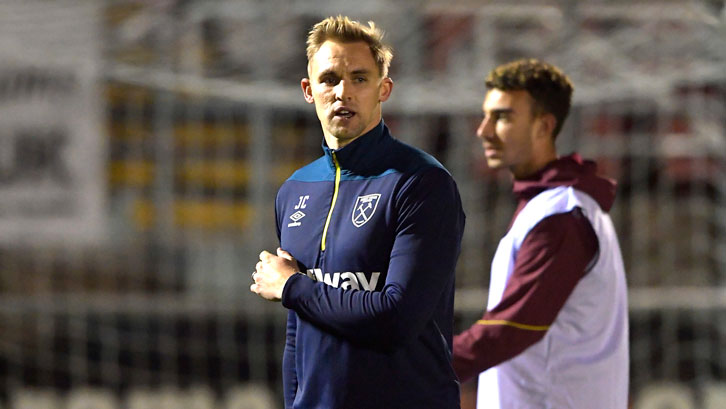 The Hammers roared into an early lead through schoolboy Amadou Diallo’s sixth-minute strike and dominated the first half at Chigwell Construction Stadium, but were unable to find a killer second goal.

Brighton improved after half-time and levelled through Danny Cashman’s fine strike before Irons goalkeeper Serine Sanneh – another schoolboy – saved Harry Jenks’ extra-time penalty to take the tie to a shootout.

Both teams missed a kick each before Sean Adarkwa saw West Ham’s seventh penalty saved and it was the Seagulls who went through to round four.

As it happened: West Ham edged out of FA Youth Cup on penalties

“It’s a tough one to take,” admitted Collison, who coaches the U18s alongside Mark Phillips. “The boys are disappointed and everyone is quite emotional right now. We just went in there and spoke them and said ‘These things happen, but you’ve just got to learn from it because in the first half we were outstanding, played really well and created lots of chances and obviously got just the one goal but could have been out of sight.

“To be fair to Brighton they were very good and probably felt a little unfortunate not to have won the game in normal time themselves but in terms of digging in, effort and commitment to the game we can’t ask for any more.

“It’s just important that when we dissect the game, the pick some bits up, learn from it and we look for areas to improve.

“A second goal would have killed the game off but these things happen and we’ve got to look at it as a good experience for the boys, playing under the lights in front of a crowd. We all know the history and everything that comes with the Youth Cup, so for them to have got exposure to that against a good Brighton team, to go to extra-time and experience a penalty shootout, yes it hurts that we lost but in time it will helpfully help their development and they’ll learn from it.”

When asked for the positives to take from an otherwise disappointing evening in Dagenham, Collison pointed to the electric display of left winger Diallo and his fellow schoolboys, while backing every member of the squad to learn from the experience of defeat and come back stronger.

“Amadou Diallo, for a schoolboy, for an U16 to go and play like that was just incredible,” he observed. “Serine Sanneh is another schoolboy and he saved a penalty and Jayden Fevrier is another one who did well.

“For the second years, it’s disappointing that they won’t get to experience it again as it was their last crack at it, but hopefully the others will learn from it for next year and will have another crack at it.”