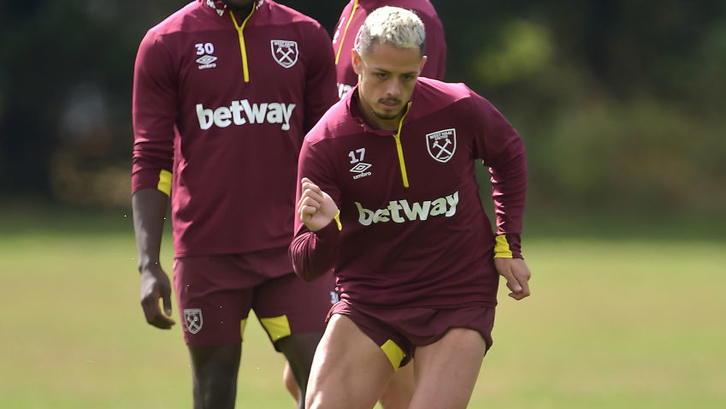 West Ham United’s starting XI for Manuel Pellegrini’s London Stadium bow has been confirmed, and Chicharito is included in the side to take on AFC Bournemouth.

The Mexican is included as one of three changes to the team that lost to Liverpool last weekend, with Pablo Zabaleta and Robert Snodgrass also included.

Lukasz Fabianski is one of four summer signings to make their home debut for the Hammers, as the experienced Poland international starts between the sticks.

Zabaleta will play on the right of defence for the Irons on his return, while Masuaku keeps his place on the opposite flank. Angelo Ogbonna and summer acquisition Fabian Balbuena are once again the centre-back pairing.

Captain Mark Noble and Jack Wilshere will form the centre-midfield, while record signing Felipe Anderson retains his place on the left wing. Scottish international Snodgrass is named on the right, having come off the bench in last weekend’s game.

Last season’s Hammer of the Year Marko Arnautovic is included up front, and the Austrian is joined by Chicharito, in what appears to be a two-man attack for the Hammers.

Spanish goalkeeper Adrian, new signing Issa Diop, and Aaron Cresswell, who has recovered from injury, are on the bench.Pedro Obiang is also on the bench, as is Ukrainian international Andriy Yarmolenko.

The five substitutes are joined by deadline day signings Lucas Perez and Carlos Sanchez, who were signed from Arsenal and Fiorentina respectively.