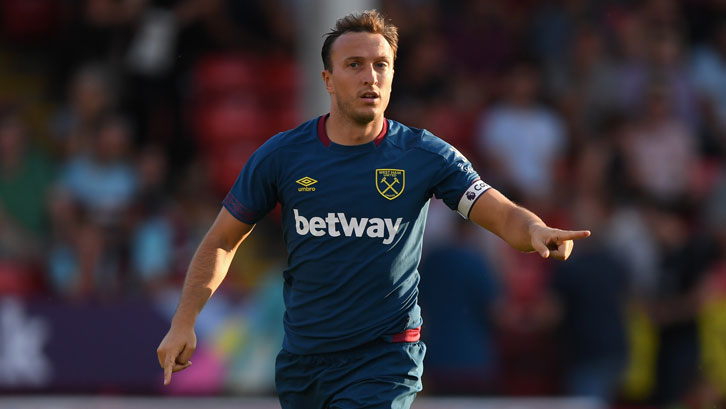 The Hammers kicked-off 2018/19 with a 4-0 defeat at Liverpool last weekend, where Jurgen Klopp’s UEFA Champions League runners-up were in irresistible form against a West Ham team featuring five debutants.

While Noble was making no excuses for their Anfield reverse, the captain did point out that it will take some time for the squad to put new manager Manuel Pellegrini’s plans into action.

“We have already put the Liverpool game behind us,” the No16 wrote in his Official Programme column. “We knew it would be tough at Anfield, with a new way of playing, lots of new players and the quality of the opposition, but I am sure we will quickly get used to the way the manager wants to play and start enjoying it.

“I know there was a bit of a reaction after the Liverpool game, but they are a settled team full of quality players, while we had five new signings and it doesn’t just click straight away.

“The Premier League now has so many really top teams in it, with five or six of them spending huge amounts of money to put together fantastic squads. We have spent a lot of money this summer, too, but you do not become a really top team overnight. “If you look back at Manchester City and Liverpool, it took them a year or two to get there, and if you want to build something, you have to start somewhere and build from those foundations.

West Ham versus Bournemouth fixtures have produced plenty of thrills in recent seasons, with 25 goals being scored in the six Premier League fixtures contested between the two clubs.

With Eddie Howe favouring a 4-4-2 formation and Pellegrini determined to play on the front foot, Noble says the stage is set for another dramatic 90 minutes.

“Our recent games against Bournemouth have been classics, with loads of goals. Eddie Howe has done a great job there and they are an exciting team to play against and an exciting team to watch, but I know our fans will be here and give us the edge we are going to need to stop them.

“They are a team, rather than a group of individuals, and Eddie gets the very best out of his players, who all know their jobs and stick to their shape. I am sure we will find this ourselves over the coming weeks and months and get the results to prove it.”