Pellegrini vows to build 'balanced' and 'attacking' West Ham side 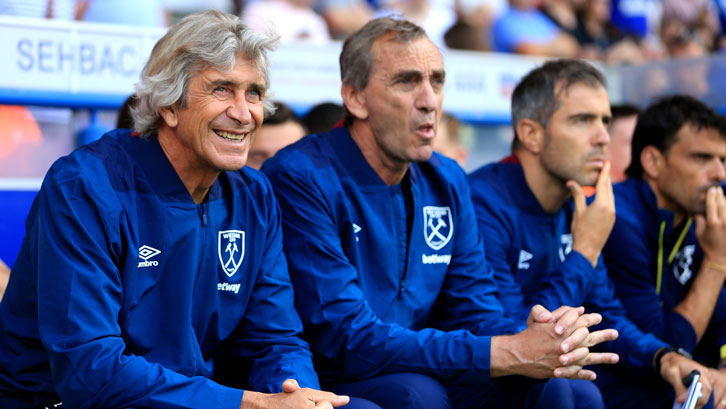 Manuel Pellegrini has reiterated his intention to build a 'balanced' and 'attacking' West Ham United team at the official Premier League launch in Manchester.

The manager returned to the city where he won the title and embellished his reputation as a forward-thinking manager during a record-breaking three-season spell at the Etihad Stadium.

Asked if he will try to bring the same offensive philosophy to east London, Pellegrini answered in the affirmative.

I will try to play attacking football and score a lot of goals because, throughout my career, I have always been a manager who plays offensive football and tries to attack

“I’m very happy because I’m back in the best league in the world,” he confirmed, when asked why he had decided to take up the challenge of managing the Hammers. “I had a very good experience away in China but after two years I’m very happy to return to the Premier League and to be at West Ham.

“I received a lot of calls from the owners when I finished with Manchester City and when I was in China, so it was a couple of years they wanted me to manage the club and bring my style of football and that sort of thing. So, I had a conversation with the owners and we came to an arrangement.

“I will try to play attacking football and score a lot of goals because, throughout my career, I have always been a manager who plays offensive football and tries to attack. But to attack, you must defend very well also, so we must be a balanced team in West Ham.

“Last season, they had one of the worst defences in the Premier League, so this year we will try and be balanced while always thinking that we want to score one goal more than the opposition.”

Pellegrini has already bolstered his attacking options with the capture of the likes of Felipe Anderson, Jack Wilshere and Andriy Yarmolenko this summer, while goalkeeper Lukasz Fabianski and defenders Ryan Fredericks, Fabian Balbuena and Issa Diop have also arrived at London Stadium.

With two days of the Transfer Window remaining, will there be further signings made?

“We will see. You never know, because the last few days there are always a lot of changes. We have some problems with three players, with Reid, Carroll and Lanzini, and we will be without them because they have long injuries.

“We have also sold some players, so we will see what happens.”

While the prospect of facing Jurgen Klopp’s Reds may daunt some managers, the Chilean is not one of them.

“In the Premier League, you never know which is the most difficult game. Of course, to play away to Liverpool to start the season is a very strong team who played in the Champions League final last season and were also fighting for the Premier League title is difficult.

“But we will go there and try to play. We are not trying to change our style of play depending on who we play against, so I hope the fans enjoy a good display.

“My expectations for West Ham are just to win the first game. Then, after that, we will see what happens with the second game. We will go step by step.