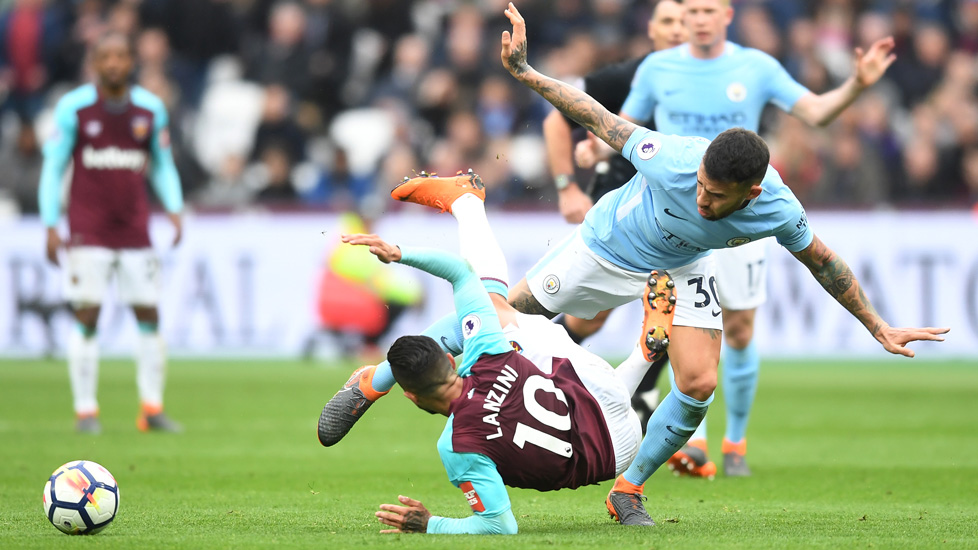 West Ham United suffered a 4-1 defeat to newly-crowned Premier League champions Manchester City at London Stadium on Sunday, conceding a brace of goals either side of the interval as the visitors showed just why they’ve swept all before them aside this term.

The hosts briefly had hope when Aaron Cresswell curled home a 42nd minute free-kick to make the score 2-1, but Gabriel Jesus and Fernandinho scored after the break to add to a Leroy Sane strike and Pablo Zabaleta’s own goal in the first half.

City were dominant for the large majority of the contest and deserved to take the points, meaning the Hammers head into the final three matches still needing the points to make sure of Premier League safety.

The pattern was set early, with the visitors enjoying 80 percent possession in the opening ten minutes, although their opening goal did carry an element of luck to it.

Sane’s shot from 20 yards appeared to be heading towards Adrian on the right hand side of the goal, but it took a nick off Patrice Evra’s head and flew into the opposite corner.

West Ham tried to respond and Manuel Lanzini’s low cross almost picked out Cresswell in the centre, but Ederson stuck out an arm to push the ball away.

Fernandinho fired low and wide of the left hand post with 22 minutes on the clock, and the visitors continued to dominate possession, doubling the lead on 27 minutes with another helping hand from the hosts.

This time Kevin de Bruyne got in down the right, taking advantage of some defensive indecision after Adrian initally had to come out of his goal to deny Raheem Sterling, to fire across goal and into the net via unfortunate touches from Declan Rice and Zabaleta.

It looked to be a long way back from there for the Hammers, but they gave themselves a lifeline three minutes before the break.

In truth, they should have had a penalty when Ilkay Gundogan upended Edimilson Fernandes right in the corner of the penalty area.

The Swiss’ momentum took him outside of the box and referee Neil Swarbrick only awarded a free-kick, but no matter as up stepped Cresswell to curl inside Ederson’s near post.

However, the lifeline was only to last until eight minutes after the break, as City restored their two-goal lead. Sterling was too rapid for Cresswell down the right flank, reaching Jesus’ searching through ball and waiting for the Brazilian to arrive in the middle before cutting back for him to take a touch and slot home.

Sterling was proving too hot to handle on the right and he almost added a fourth just past the hour when he ran onto Jesus’ pass but was denied by Adrian as he came to meet him on the edge of the box.

When the fourth did arrive on 64 minutes it was far too easy for the visitors. Manuel Lanzini was caught on the ball inside his half, and quick as a flash Sterling was away again to pick out Fernandinho for a simple finish.