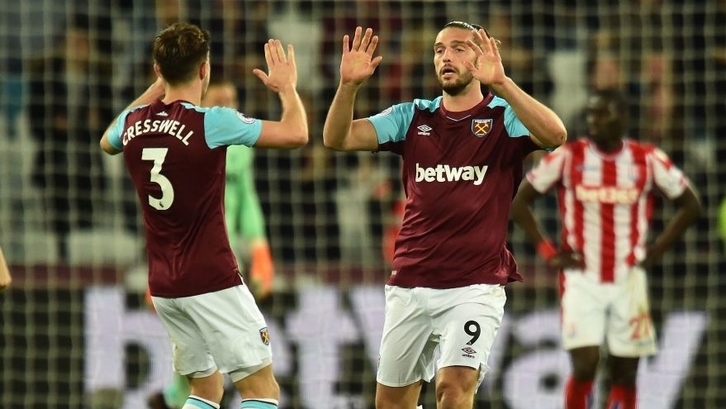 A late finish from the returning Andy Carroll earned West Ham United a share of the spoils in Monday night's 1-1 draw against Stoke City.

The striker - making his comeback from an injury layoff - latched on to an Aaron Cresswell cross to excellently volley into the bottom corner, after fellow substitute Peter Crouch put the Potters in front from close range.

West Ham would put the ball into the back of the net a further three times in the match, but would see those efforts ruled out for offside and handball in a close contest at London Stadium.

An early effort on goal from Arthur Masuaku was well saved by Jack Butland, before Arnautovic had a chance to test the goalkeeper.

Joe Hart also had to show off his reflexes, getting down early to deny Bauer after Shaqiri played in the Stoke right-back, while the England shot-stopper also did well to keep out a driven shot from Mame Biram Diouf.

The in-form Arnautovic combined well with Joao Mario throughout the first period, and looked the Hammers greatest threat, seeing an effort go just wide before Butland stopped the Austrian from finding the net.

Ten minutes after the restart, it looked like Arnautovic had his goal. Aaron Cresswell drove into the midfield space and whipped across a fantastic ball, which the No7 coolly headed into the bottom corner. However, the forward was marginally offside.

Just moments later, Diouf missed a big opportunity. Bauer drove down the right-flank and played in a low ball, which the Stoke striker could only send over the bar from a few yards out.

The effort from the Potters, and a substitution, seemed to push the Irons onto the offensive, as Cresswell again looked to supply a ball into the box. The crossed attempt was hacked clear, before Mark Noble had a curling shot blocked.

Just after the hour, the Hammers had the ball in the back of the net again. This time, Edimilson Fernandes drove a lot shot from outside the penalty area, which Butland could not save, but once again the linesman’s flag muted West Ham celebrations, with it ruled that Arnautovic had influenced play from the offside position.

Cresswell then saw a low free-kick tipped away by Butland, before Fernandes made way for the introduction of Chicharito with 15 minutes remaining.

The away side would take the lead on 78 minutes. Xherdan Shaqiri took a shot from the edge of the penalty area, which substitute Crouch tucked in from close range on the rebound.

David Moyes would respond with the introduction of Manuel Lanzini on 80 minutes and Andy Carroll four minutes later, and it was the latter that would equalise in the closinng moments of the game.

An excellent ball from Cresswell found the striker on the edge of the box, and Carroll superbly volleyed home into the bottom corner, levelling the match as the game ticked into extra time.

There was still time for more drama as Chicharito seemed to have won the game in the dying embers of the contest, only for the Hammers to be denied for the third time by the officials, with Michael Oliver ruling that Carroll had handled the ball in the build-up.