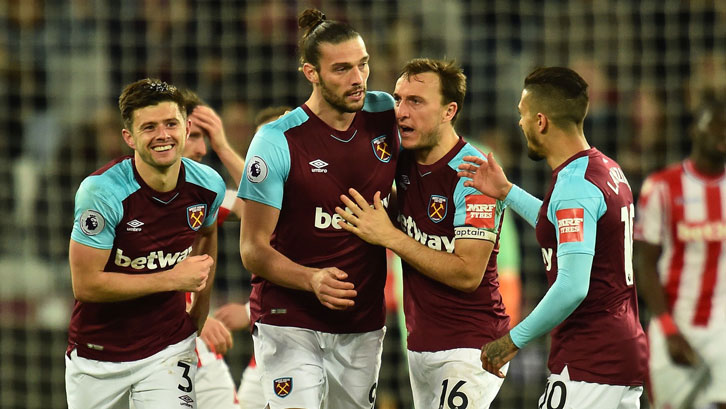 Andy Carroll felt denying Stoke City three points was as important as earning West Ham United one after his volley secured a 1-1 Premier League draw with the Potters at London Stadium.

The Hammers had controlled long periods of Monday night’s game, only to fall behind with eleven minutes remaining when Peter Crouch prodded home from close-range after Joe Hart had saved Xherdan Shaqiri’s initial effort.

David Moyes, whose side had already seen two ‘goals’ correctly disallowed by referee Michael Oliver, threw on Carroll and the centre forward marked his return from three months out with a foot injury with a superb left-foot volley in the final minute.

There was still time for West Ham to have the ball in the net for a fourth time, only for Oliver to whistle Carroll for handball before Chicharito’s drive had beaten Jack Butland.

We took [two] points off them, though, and it’s a point for us, so it’s a good result in the end

“I thought we played well throughout,” said Carroll. “Obviously Crouchy came on and scored, which is what he does best, and it was disappointing for us because we’d had a few chances and a couple of goals disallowed.

Carroll’s superb left-foot strike belied the fact he has not played a Premier League match since appearing in the 1-1 draw with Tottenham Hotspur at Wembley on 4 January.

“I don’t know if it looked sharp, because I didn’t feel sharp! The ball came in and I like them on my left foot, so I just span and hit it and it went in.

“I’ve trained for five days in with the lads, having worked with the physio beforehand, so not too much.”

And what of the ‘goal’ disallowed after Carroll had controlled the ball and set up Chicharito in the second minute of added time?

“I tried to bring the ball down and it hits my hand a little bit. If it’s a shove in the back, it’s a penalty, but we played on and he didn’t give it and, in the end, it’s a point, so we’ll take it.”

Next up for West Ham is a trip to Arsenal on Sunday. With five games to go, one more victory might well be enough to secure safety, and Carroll would love to achieve it at the Emirates.

“We’ve still got five games left and we’ve got to win them as no-one is safe. It’s tough at the minute and we’ve just got to keep working.”

Antonio: I was surprised to score that winner!