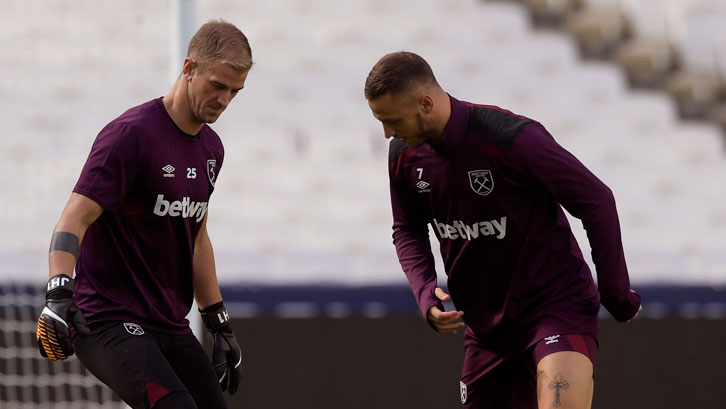 Joe Hart believes West Ham United have the attacking players to cause trouble for any opponent.

The Hammers will need their talented forwards to be at their best as they continue a challenging Premier League run-in with the visit of Stoke City to London Stadium on Monday evening.

Following that clash with the Potters, West Ham will take on three of the current top six in their closing five fixtures, with a trip to Arsenal followed by home matches against leaders Manchester City and second-place Manchester United.

But with Marko Arnautovic in the form of his life, Chicharito scoring a superb equaliser at Chelsea last time out, and both Andy Carroll and Manuel Lanzini closing in on returns from injury, goalkeeper Hart has backed his teammates to hit the target regularly over their final half-dozen fixtures.

“We’re definitely a really dangerous team,” said the stopper, who was himself in outstanding form in Sunday’s 1-1 draw at Stamford Bridge. “Marko is in absolutely fantastic form for us after a difficult start to his West Ham career, but since then he’s been our standout player. I’m really pleased for him because he’s a really good guy.

“Chicha is just a top, top professional. He’s a goalscorer. It’s been different for him, especially with internationals and travelling the length and breadth of the world, so we weren’t able to get him on the bench last weekend, but he’s come off the bench this time around and got a goal he deserved.

“He’s a top player. There is no fluke to his career or fluke to him winning all those medals. People don’t get given medals – I know that for a fact and so does Chicha.”

Two-time Premier League champion Hart has every incentive to maintain his own good form as the season reaches its conclusion.
With places in England’s 2018 FIFA World Cup squad up for grabs, the No25 knows only his very best form will secure a spot in Gareth Southgate’s final 23-man party to travel to Russia.

Regardless of whether he is ultimately picked or not, the 30-year-old will do his very best every time he pulls on his gloves.

“Sunday was for me. I know who I am and what I am. I have had medals around my neck for years and years and got England caps. I work hard, I’m dedicated and even when I’m not playing I’m the same guy.

“I play for my team, my family and my friends and anyone else who wants to comment, that’s up to them and I don’t really care. I love playing football and I’ll keep playing football.”

And his next chance to do what he loves comes on Monday evening, when West Ham seek three points that should keep them in the Premier League.

“I feel like we have a huge, huge game next Monday. It’s such an important match for us and, at the end of the day, for all the good that came out of Sunday, we only got one point and we want three points. We’re really looking forward to Stoke now.

“It’s a massive game. I’ve watched Stoke and heard Paul Lambert talk about his team and he’s happy and believes in his team, so they are going to see it as a big opportunity, as we are, so it’s going to be a tough game.”