Arnautovic: We must believe we can beat Chelsea 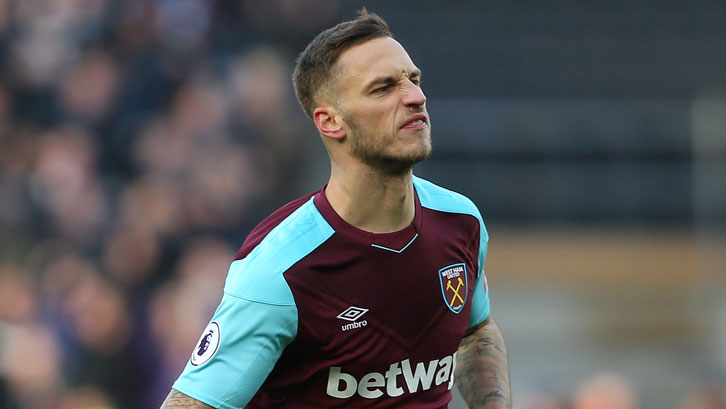 But the in-form centre forward’s work is far from done and the Hammers’ battle for survival is far from over.

The Austrian has scored nine goals and assisted three more in his last 13 Premier League appearances. The first of those goals came in a 1-0 home win over Chelsea in early December, and Arnautovic will take aim at the Blues again in Sunday’s reverse fixture at Stamford Bridge.

“We are not safe yet but since I scored my first goal against Chelsea my season started to be great and I have tried to do everything to help the team and of course to score some goals, that’s the most important thing,” observed the No7, who scored two in a 3-0 victory over Southampton last time out.

“First of all [our aim is] to get a clean sheet and then it’s up to us up front to score goals and in some games we did it and some games we didn’t, but I’m not very happy where we are now.

“After this win [over Southampton] we are comfortable but we are not safe and I haven’t yet saved West Ham, but I will try to save us of course.”

We have to work hard, run hard, stay compact, stay as a team and then when we believe in ourselves then we can win games

When West Ham welcomed Chelsea to London Stadium four months ago, Antonio Conte’s men had won six out of seven in the Premier League, while the Hammers were yet to win under David Moyes and had lost five out of their own previous seven top-flight matches.

The odds were stacked against the hosts but, thanks in large part to Arnautovic, they overcame them to secure a landmark victory. The striker is eyeing a repeat performance on Sunday.

“It was a hard game at the time. Chelsea were in a good run when we beat them but I think we did a good job all over the part of the pitch and that’s why I think we won the game, because we believed and we worked hard and we need to do that again too.

“It’s never going to be an easy game as Chelsea is a top side and we know there are world-class football players in this team, but we are going there to try and take something out of this game and in the Premier League you never know. You can win lots of games then you can lose a lot of games.

“Everybody is of course feeling that Chelsea are going to beat us but we are going to try to take something out of the game, but it won’t be easy and we’re aware of that.”

Arnautovic’s form and confidence have clearly taken a massive upturn since that win over Chelsea, and since Moyes’ appointment as manager.

From the very start, the Scot has publicly called on the talented forward to put in the effort to enable him to get the most out of his ability. Arnautovic has responded and is now reaping the considerable rewards.

“The manager said ‘You need to work hard and run hard otherwise you won’t play’ and, when he said this to me, I was aware of that.

“I’m a player who always wants to play and I think I did the job that he wanted from me, but it’s not over now. We still have seven games and it’s going to be hard and difficult as we still have some top teams coming to us and we have to go to Chelsea and Arsenal so it’s not over.

“We have to work hard, run hard, stay compact, stay as a team and then when we believe in ourselves then we can win games.”