Hammers edged out in derby thriller 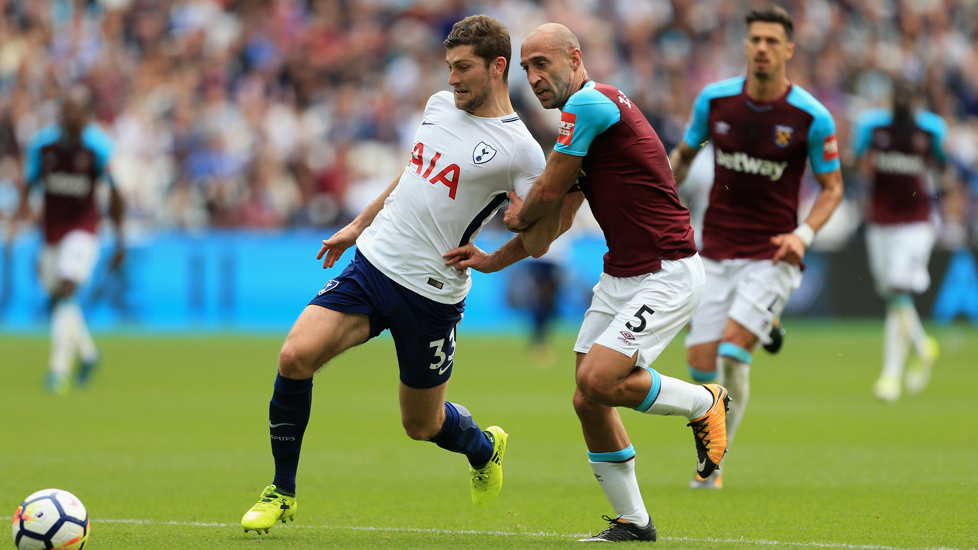 West Ham United produced a grandstand finish but were denied a share of the spoils as Tottenham Hotspur edged a gripping content 3-2 at London Stadium.

The Hammers looked dead and buried when they trailed 3-0 with an hour played to a Harry Kane double and Christian Eriksen’s thumping finish but Chicharito’s headed goal and Serge Aurier’s red card gave them a route back into the contest.

Cheikhou Kouyate’s bullet header further reduced the arrears and Spurs were hanging on, but hang on they did as the Hammers’ three-match unbeaten run came to an end.

Chicharito, playing in a central role with Marko Arnautovic and Michail Antonio flanking him, tried his luck with an audacious 30 yard effort with eight minutes played, not clearing Hugo Lloris’ crossbar by much with the Spurs goalkeeper backpedalling.

It was a bright start from the hosts and Arnautovic slalomed his way through the Spurs defence eight minutes later and looked poised to shoot, only for s to produce a superb saving tackle.

With 24 minutes on the clock, Tottenham worked an opening down the Hammers left. Moussa Sissoko played in Aurier, and his low cross looked perfect for Kane, but his touch took the ball wide. It wouldn’t have counted in any case, as the flag was raised for offside.

Moments later, Antonio went down with what appeared to be a muscle injury, prompting a reshuffle from Slaven Bilic which saw Andy Carroll come on up front and Chicharito move wide.

It was Tottenham who struck first with 34 minutes on the clock when they pounced on loose midfield play from the Hammers in the most devastating way possible.

With their next attack it was two. Joe Hart did well to spread himself and deny Alli, but the ball broke perfectly for Kane to stroke home.

The Hammers needed something early in the second period to give them hope, but instead it was the visitors who moved further in front on the hour.

West Ham thought they had got away with it when Kane’s free-kick struck the base of the post, but Aurier got the ball back into the box, and it dropped for Eriksen to ram a first-time finish into the net.

Chicharito gave the home fans something to cheer five minutes later when he peeled off his man to get on the end of Jose Fonte’s flick-on from an Arnautovic corner and guide his header beyond Lloris.

It was the Mexican’s first London Stadium goal, and he nearly had another on 68 minutes when Mark Noble picked him out from the right, but this time Lloris was positioned well to grab his header.

West Ham tails were up, and with 20 minutes to play they were given a further boost when the visitors’ Aurier picked up his second yellow card for a foul on Carroll was was sent for an early bath.

Eleven minutes from time, the comeback was so nearly on when Chicharito fashioned space for himself inside the box and unleashed a fierce shot at goal, but Lloris got behind it to beat away.

With three minutes to play, the grandstand finish the crowd wanted was set up when Arthur Masuaku’s wicked cross was met with a thunderous header at the far post by Kouyate, giving Lloris no chance.

West Ham threw everything at their hosts, winning a couple of corners, but could not force that vital third goal as Spurs held out.