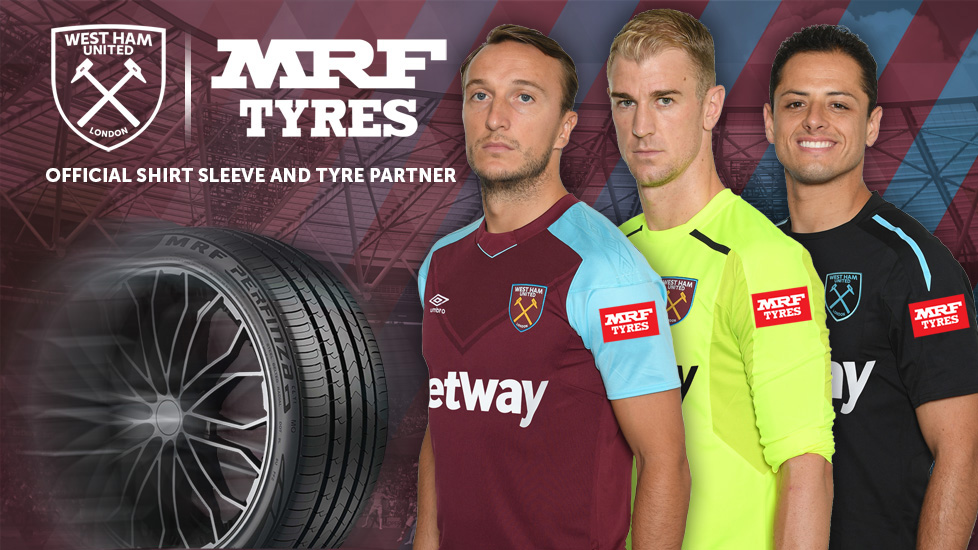 MRF’s logo will feature on the left sleeve of the iconic claret and blue shirt, with this season being the first where top flight clubs can create brand partnerships to advertise on the sleeve of player shirts.

MRF join West Ham at an exciting time as they head into their second season at London Stadium, with the east London Club having added Chicharito, Joe Hart, Marko Arnautovic and Pablo Zabaleta to their squad this summer.

Founded in 1946, MRF are the largest manufacturer of tyres in India employing over 15,000 staff. The publicly listed company produce rubber goods including tyres, treads, tubes and conveyor belts, as well as toys and paint.

MRF currently enjoy a suite of other partnerships in sport with current endorsements of cricket stars Shikhar Dhawan, Virat Kohli, AB de Villiers and Sachin Tendulkar amongst others.

Karren Brady, Hammers Vice-Chairman, said: “On behalf of everyone at West Ham United I’d like to welcome MRF to our family of partners. MRF join us at an important time in our history as we embark on our second season at London Stadium and look to grow as a club on and off the pitch. West Ham's shirt sleeve provides an excellent opportunity for MRF to gain enormous exposure in the most watched league in world football and we look forward to working with them throughout the season”

Koshy K Varghese, Executive Vice President, Marketing, MRF Ltd, added: “We’re delighted to join West Ham United as their first ever sleeve partner. They’re one of the most historic teams in not only English football, but world football and we’re honoured to be part of their journey. From the stadium to their loyal fanbase, we know everything about the Club is going in the right direction. We look forward to the Premier League season ahead!”