It was a near-faultless team performance according to Academy Director, Terry Westley, after West Ham United’s under-21s beat Bristol Rovers in the Checkatrade Trophy on Tuesday evening.

Despite conceding after just 25 seconds at the Memorial Stadium, West Ham dominated proceedings on a chilly evening in the West-country and fully deserved their 3-1 win. A brace from Toni Martinez – his tenth and eleventh of the season already - either side of a Martin Samuelsen goal secured the points and guaranteed the Hammers’ qualification into the knockout rounds of the competition.

To take on League One outfit and win so convincingly was especially pleasing for Westley:

“The manner in which we won is extremely satisfying” he said.

“We’ve had a hard October, playing Manchester United, Chelsea away, then Manchester City at the weekend and now to finish it off against a League One side, who had a very strong team out today, we took it to them.

“After a disastrous start, it just shows the character of this group led by a tremendous captain in Declan Rice and beside him Josh Pask, as centre-halves they really got to grips with what Bristol Rovers threw at us. It was hard at times, having to keep heading balls and clearing it out but when we got it down, we passed them off the pitch. 3-1 could have easily been more than that."

The equaliser came from the penalty spot on 43 minutes after Ben Johnson was brought down inside the box. It was Martinez who stepped forward and confidently drove the ball into the bottom corner to level things up.

After the break, West Ham dominated. Pace down the right, left and through the middle from Haksabanovic, Holland and Samuelsen and Martinez respectively put the Pirates’ defence under extreme pressure and it wasn’t long before they cracked: Martin Samuelsen capitalising on some space in the box to fire home from close range.

Sometimes you have 'it’s a Martinez show’ or 'it’s a Holland show’, tonight was a really good team performance by everybody. 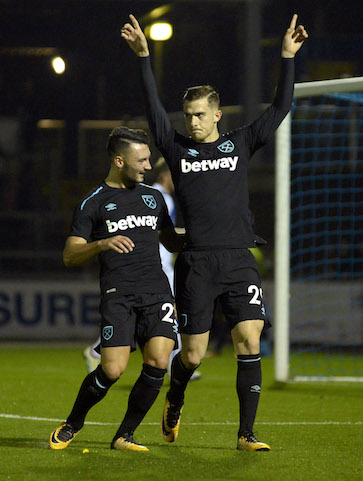 Martinez’s second and the Hammers’ third was the goal of the night, however.

“The way he got in between people and he saw the keeper and instantly knew he had to take it in one touch, it was a magnificent finish.”

Toni Martinez’s two goals may grab the headlines and Westley was delighted with the Spaniard’s contribution, but was quick to place praise on the whole team effort on this particular night.

“Sometimes you have 'it’s a Martinez show’ or 'it’s a Holland show’, tonight was a really good team performance by everybody.”

“The challenge for tonight was: ‘you want to go and show you can play in League One or the Championship so you’ve got to show you’re as good if not better than these players’ and we’ll get back on the bus knowing that a lot of our players can play at this level.”

The win caps of a fantastic October for the Development Squad, who have faced U23 opposition in Manchester United, Chelsea and Manchester City before the Checkatrade Trophy battle with League One, Bristol Rovers, on Tuesday. From a possible twelve points, they have taken ten – only a draw against Chelsea, away, in between three hugely impressive victories.

“Without a doubt [we’d have taken ten points]” the Academy Director explained.

“That’s what this group needs, those type of challenges against the very best players. Saturday, we had four under-18s in the starting line-up, today we had three in Ben Johnson, Conor Coventry and Domingos Quina so we’re young, we’re a very young team in this league and we outplayed them tonight.”