Obiang optimistic on return to action 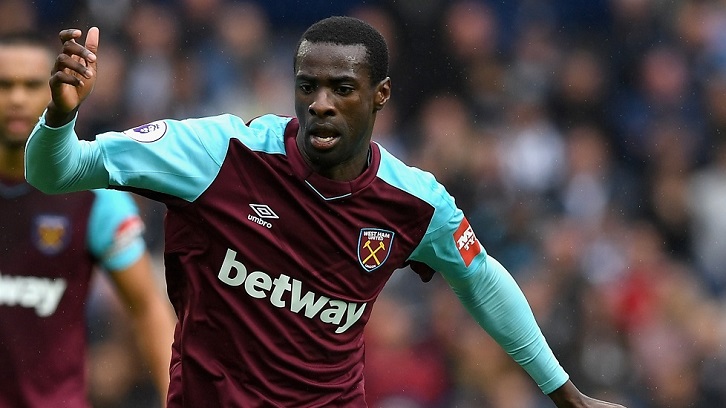 Pedro Obiang is on track to return to action in Saturday’s Premier League fixture at Burnley.

The Spanish midfielder suffered a muscle injury in the goalless draw at West Bromwich Albion on 16 September, but has worked hard to regain his match fitness over the international break.

And the popular No14 says is on track to be available for selection at Turf Moor this weekend.

“The injury is progressing well,” he confirmed. “On Wednesday, I came back to training with the squad so I will probably be ready to play this weekend.

“If we want to be positive, my injury happened at the right time because we had the break to take time and didn’t have to rush, because sometimes when you rush you can take another injury. So, we took time and now I’m close to being perfect.

“We had to work hard during the long week while the others were away, because they are playing and working hard and for us it is the same. When the others come back, you have to be ready to play.”

We had to work hard during the long week while the others were away, because they are playing and working hard and for us it is the same

Having missed the tail-end of last season after undergoing ankle surgery, Obiang might have been expected to be feeling down after being ruled out again so soon.

But the midfielder is taking a mature outlook on things these days and is feeling optimistic ahead of his imminent return.

“The truth is that it was frustrating but I am being philosophical and when it happens, it happens, and I tried to be calm.

“It’s difficult for the team but it’s more difficult individually because you are out and have to prepare yourself and, if the results of the team are good, you have to wait for your time. It’s always the same story.

“It’s easy now for me to be patient but if this situation had happened one or two years ago, probably it would be difficult.”

Obiang is also feeling philosophical about his last appearance, which saw him rattle the crossbar with an amazing 45-yard effort in the goalless draw at West Bromwich Albion.

“I was lucky the week before [when I scored a deflected goal at home to Huddersfield Town], but I wasn’t lucky with that one! That’s just football – sometimes you have the opportunity and sometimes you cannot score.

“I have tried many times to score a goal like that, sometimes in training, but it always finishes like that, hitting the crossbar, or a little bit too high, or sometimes the goalkeeper takes it.

“You have to take a risk but, in that situation I had good feeling because I had scored in the game before, I was feeling a positive feeling to try.

“It didn’t happen so maybe I’ll have to wait until after I’ve scored another goal to try again.”

So, while he may not try another shot from the halfway line at Turf Moor, Obiang is excited about the prospect of returning to action at Burnley this weekend.

“We need to repeat the performance from the last game of last season, but I don’t want to talk about that game because it is irrelevant because this game is different.

“We have players coming back from injury and need to go there with the right mentality, fight and play the football we know how to play.”