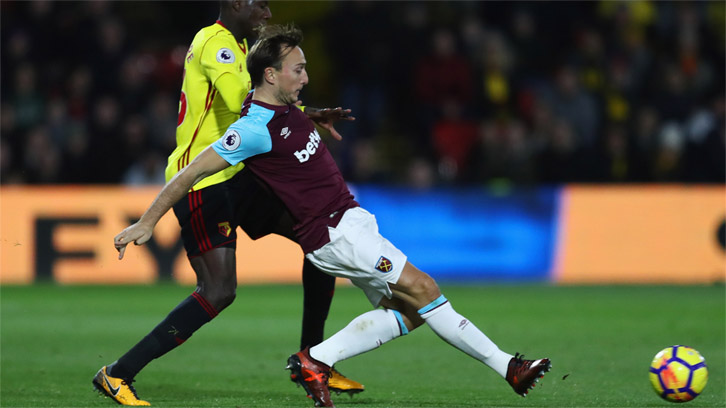 David Moyes’ tenure as West Ham United boss started in frustrating fashion as the Hammers were beaten 2-0 by Watford on Sunday.

Goals from Will Hughes and Richarlison sealed the win for the Hornets, who rode their luck at times as the visitors saw a number of golden opportunities pass them by.

Cheikhou Kouyate was guilty of missing two superb chances to equalise and Manuel Lanzini had an effort cleared off the line, but Marco Silva’s side held on to record the victory in Hertfordshire.

It was far from the dream start to Moyes’ West Ham career as Watford took the lead after just eleven minutes at Vicarage Road.

A cross from the left was only half cleared, and although Andre Gray’s attempt was scuffed after he had brought it away from Pedro Obiang, it fell kindly for Hughes who calmly curled into the far corner, leaving Joe Hart in goal with little chance.

Andy Carroll had a header saved shortly after and Aaron Cresswell tried an ambitious attempt from his own half with goalkeeper Heurelho Gomes spotted off his line but on the half hour mark the Hornets went close to doubling their lead.

Richarlison’s initial effort was pushed away by Hart but only as far as Kiko Femenia, who fired an inch or two wide from the edge of the box.

That was as close, however, as the hosts came to a second in the first period and next it was the Hammers’ turn to threaten.

Skipper Mark Noble fired a superb pass through the defence for Kouyate, who was somehow denied by Brazilian Gomes who spread himself at the feet of the midfielder.

And in first half stoppage time, Moyes’ men went even closer but it was again Gomes the hero for the hosts. First pushing a Marko Arnautovic in front of him, the stopper somehow reached up and clawed the winger’s second effort away from the goalline from point blank range. 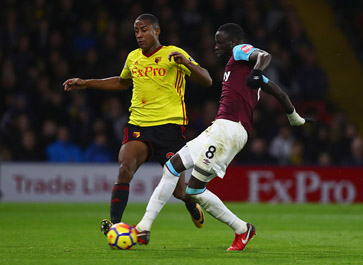 The visitors began the second half as they had ended the first; on top, and a golden chance to equalise fell the way of Kouyate once again.

Great work from Arnautovic saw the Austrian get to the byline and pull back for the Senegal international, who smashed well over with the goal at his mercy.

And the Hammers’ misses came back to haunt them when on 64 minutes, Watford grabbed a second.

Winston Reid could only find the feet of first goalscorer Hughes with a clearing header, and the midfielder drove forward, eventually finding Richarlison with a pinpoint pass.

Bearing down on goal down the left hand side, the Brazilian stayed on his left foot and fired past Hart to double the Hornets’ lead.

With a quarter of an hour remaining, Lanzini fired towards the bottom corner and thought he had cut the deficit, but Christian Kabasele was on hand to turn it off the line.

West Ham continued to push to find a goal which would give them hope at Vicarage Road, but Silva’s team stood strong and the three points went to Watford.