Pablo's praise for the Claret and Blue Army

Pablo Zabaleta is relishing the prospect of being roared on by the Claret and Blue Army after agreeing to join West Ham United this summer.

The highly-decorated Argentina full-back will link up with the Hammers on 1 July after putting pen to paper on a two-year contract.

Zabaleta has spent the past nine seasons with Manchester City, during which time he played against West Ham on no fewer on 12 occasions, including four visits to the Boleyn Ground and an appearance at London Stadium in last season’s Emirates FA Cup.

Every time he played in east London, the 32-year-old was wowed by the noise and atmosphere generated by the passionate West Ham supporters – and hopes to reward their loyalty by bringing silverware to the Club.

“I must say that it was always a privilege as a player to go to Upton Park and to London Stadium and see the atmosphere in these stadiums,” Zabaleta told West Ham TV.

“I would probably say West Ham are one of the greatest fans in England with great tradition and in home games and away games as well, following the team everywhere.

“The Bubbles you have when you come out from the tunnel make it more special as well, so hopefully as a player I can give good moments to them, but it’s not all about me but about the players performing well as a team to make sure we can win something together.” 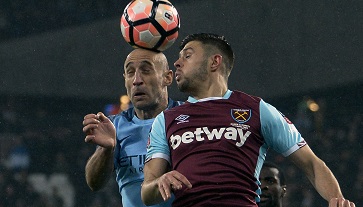 While his overall career record against the Hammers reads ‘Played 12, Won 9, Lost 2’, he tasted victory just once in his four appearances in east London – an FA Cup third-round win at London Stadium in January.

So, it comes as no surprise that Zabaleta did not always enjoy turning out as a visiting player in the East End, and he is looking forward to the boot being on the other foot going forward!

“It was always hard playing at West Ham away,” he recalled. “They said that Upton Park was the home of West Ham for so many years and it is now a new era in London Stadium, where when I went to play my first game I thought the atmosphere was really good. That’s why I’m here.

“I’m really happy, my family will also enjoy it and, as I say, I’m very proud to remain in England to keep playing in this wonderful league.”