The 17-year-old, who has penned a three-year-deal with the Hammers, is a highly-rated central-midfielder and has been a regular starter for the U18s this season.

Impressive throughout the campaign for the Academy side, Lewis also played eleven times for the U23s, including appearances in the Checkatrade Trophy against Football League sides Coventry City, Wycombe Wanderers and Northampton Town.

Having signed the deal which will keep him at the Club until 2020, the hot prospect expressed his delight at putting pen to paper.

He said: “It’s great news. This is the contract you always want when you first join the Club. I’ve done my scholarship and now I’m on my pro deal, so I’m looking forward to it.

“Hard works pays off, like they say. Over the years, training and playing games – it’s great now I have got this deal but I can’t sit back on it – I need to keep pushing on.

“It’s been a great season for me [this year]. The youth teams have been doing well; the U23s were promoted last week and it’s been a good season. I’ve had a few 23s games and a lot for the 18s.

“I’ve learnt about the physicality and the quickness of the football for the U23s, especially against the Football League teams [in the Checkatrade Trophy], and it’s been a great experience for me. The games in that competition have probably been the best ones this year.

“Playing against the guys at the back in those teams, it’s different to what you’re used to in the 23s, so it was a great experience for us.”

Lewis has played much of the season under the guidance of U18s coaches Mark Phillips and former Hammer of the Year Steve Potts, and has also received plenty of feedback from tutor Liam Manning.

Hard works pays off. It’s great now I have got this deal but I can’t sit back on it – I need to keep pushing on. 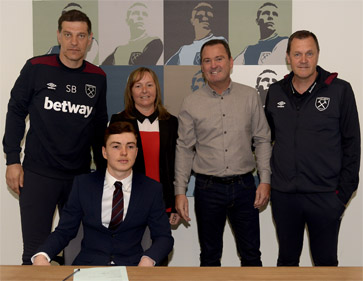 And Academy Director Terry Westley has high hopes for the midfielder, who he believes is still yet to develop fully and improve.

“He’s a boy we think a lot of, and he’s gifted on the ball – he still has an awful lot to come,” Westley claimed. “It’s not like he’s an early developer; he has plenty more development in him and he deserves his professional contract.

“Slaven [Bilic] has brought him over for training sometimes and he’s been with the U23 group this season. You can see that progression.

“This season, with Domingos Quina, Nathan Trott signing pro deals, and with Reece Burke and Reece Oxford up there, Alfie follows in that tradition of us giving contracts over a longer period of time so we have a chance to develop him.”

And Lewis, who describes himself as a player who likes to “get on the ball and create things”, hopes to follow in the footsteps of those mentioned by Westley.

The youngster continued: “It’s really important to know that the Club want to push the players through from the Academy, and you know that you’ve got a chance if you keep doing things right, and you’ll get the opportunity.

“Hopefully I can follow in their footsteps. [Also players on loan this season] have done really well, and I’ve watched a few of their games. The leagues that they’re playing in are not easy, so it’s great.

“Hopefully next year I’ll push on and play more games for the 23s, train with the first team even more as well. I’ve trained about five times this season, and it’s great to come over and see what they’re doing. It’s good.”