Rice - It's a dream come true

The Hammers U23 captain was rewarded for a hugely promising campaign when Slaven Bilic sent him on for the closing stages of the Hammers’ final-day victory at Turf Moor – becoming the 923rd player to pull on a West Ham shirt in the process.

Having also captained the U23s to promotion to Premier League 2 Division 1, the Republic of Ireland U19 international has also received a call to train with Martin O’Neil’s senior squad ahead of their summer fixtures with Mexico, Uruguay and Austria.

“It’s a dream come true,” the 18-year-old told West Ham TV. “Ever since I started kicking a ball, it has always been my ambition [to play in the Premier League], so my dream has come true and I’m delighted.

While he has long been rated by Academy staff, Rice has developed quickly this season, having first caught the eye during West Ham’s tour to the United States in summer 2016.

Despite his quick development, the defender has vowed to remain calm and composed and continue to work hard towards his ultimate goal of becoming a first-team regular. 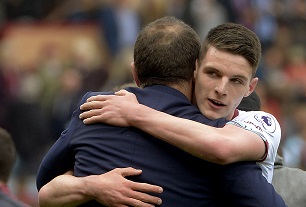 As is always the case when one of their own make a first-team debut, Rice’s appearance is also a feather in the cap for everyone working at the Academy of Football.

The teenager’s family were also at Turf Moor on Sunday and were quick to congratulate him after the game.

Next up for Rice is a three-day training camp in Cork, where he hopes to make an impression again training alongside the likes of West Ham teammate Darren Randolph.

“Terry Westley called me and I was sat at home and just couldn’t believe it when he said Martin O’Neil had called him up to say he wants me to go to the training camp. My heart was pounding and I was thinking ‘Is this true?’.

“Now I’m focused on that and joining up on Tuesday. I’ve just got to work hard in training and try to impress Martin O’Neil and Roy Keane.”