Kouyate - We won it for Slav 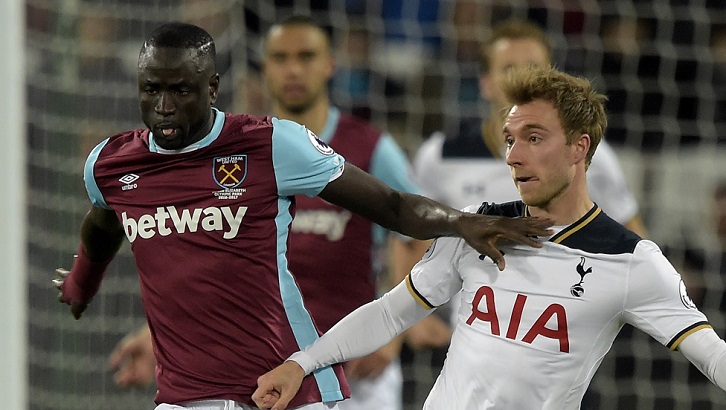 The No8 and his teammates went into the game knowing victory would not only dent Spurs’ title chances, ensure the Hammers’ Premier League status and send the Claret and Blue Army home happy, but also give manager Bilic a welcome boost.

The boss had been asked repeatedly about his future during a challenging campaign, but Kouyate hopes a deserved win over an in-form Tottenham will silence any remaining critics.

“Despite all the speculation, Slaven was very confident before the game,” the Senegal  captain began. “We were right behind him the entire way. He said before the match that this was like a final for us and so we are very happy that we’ve won it for him.”

Kouyate was at his influential best against Tottenham, contributing at both ends of the pitch with three shots, three clearances, three interceptions, a tackle and key pass and 38 touches of the ball.

We were right behind him the entire way. He said before the match that this was like a final for us and so we are very happy that we’ve won it for him

“We knew this game would be very difficult, but we also knew before the game that we needed to win it,” he continued. “We know that a derby is not a match you can joke about – it is a match we had to win.

“We also knew that Tottenham had to win maintain their shot at becoming the champion, but we also needed the win because we knew it was a matter of life and death when it came to our survival.

“We gave everything and at the end we got the win we deserved after the work we have put in over the last three weeks.”

“We obviously knew we lost a lot of points before in the other matches and we had to make up for that.”

Next up for the Hammers is the visit of another of the Premier League’s high-fliers to London Stadium in the shape of third-place Liverpool.

Having drawn 2-2 at Anfield before Christmas, and beaten Jurgen Klopp’s side three times last season, Kouyate and company know they have the quality to defeat the Reds again on Sunday afternoon.

However, the 27-year-old also knows West Ham will need to reach the same levels they reached against Tottenham if they are to sign-off the season with another memorable home win.

“The objective for us for the remainder of the season is to get as many points as possible,” Kouyate confirmed. “We know that finishing as high as ninth or tenth is still possible.

“We have Liverpool on Saturday, and we know it won’t be easy, but we will give everything until the end.”