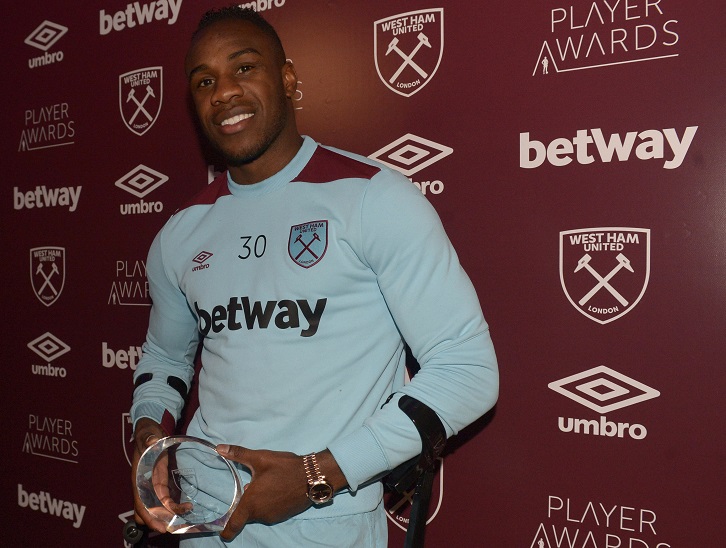 Michail Antonio has been crowned as the 2016/17 Betway Hammer of the Year.

The winger has been recognised for his outstanding season for West Ham United by becoming the 39th different player to win the acclaim of the Claret and Blue Army.

Antonio, who has scored nine goals and registered five assists in 37 appearances, won 47 per cent of the vote, with Manuel Lanzini finishing as runner-up with 21 per cent, and Pedro Obiang third with 14 per cent.

"It's just a great feeling and hopefully I can do it again!" said the winger. "I'm extremely grateful to the fans who voted for me because they have been to home and away games, week-in, week-out, so for them to give this Award to me has left me so overwhelmed and buzzing.

"It's crazy because I've only been in the Premier League for two years and last year I came runner-up and this year I've won it, so hopefully I can keep going, keep pushing on and keep doing what I'm doing.

"I have to say my England call-up was a massive highlight and winning Hammer of the Year is amazing because it's come from the fans, who can be our biggest critics."

Antonio has enjoyed two superb seasons since arriving from Nottingham Forest in summer 2015, scoring 18 goals in 69 appearances, including the equaliser in West Ham’s unforgettable Final Game win over Manchester United at the Boleyn Ground last May.

The current campaign saw the No30 kick-off in style, scoring the first Premier League goal in London Stadium history against AFC Bournemouth in August, and five in his opening four top-flight appearances.

That form saw him earn a first-ever England call-up for Sam Allardyce’s only game in charge, and he was included in the Three Lions squad for a second time by Big Sam’s successor Gareth Southgate in March.

While his scoring rate in Claret and Blue slowed, Antonio continued to produce the goods in a variety of positions, as injuries and suspensions saw him fielded as a right wing-back, right winger and centre forward by manager Slaven Bilic.

After scoring at Tottenham Hotspur and Swansea City either side of Christmas, the Wandsworth-born player turned provider against Crystal Palace, when his three second-half assists inspired the Hammers to a vital 3-0 home win.

A ninth and final goal of the campaign arrived at AFC Bournemouth before a hamstring injury prematurely ended Antonio’s season, but the 27-year-old had already done enough to secure a deserved maiden Hammer of the Year award.

Antonio was one of a host of winners at the 2016/17 Player Awards brought to by Betway in aid of the Academy, which were held for the first time at InterContinental London – The O2.

Lanzini took home the Players’ Player of the Year honour, Andy Carroll benefited from one of Antonio’s aforementioned assists to net the Goal of the Season against Crystal Palace, while Darren Randolph’s fingertip stop to deny Liverpool’s Jordan Henderson scooped the Save of the Season award.

James Collins’ display in the 1-0 win over Swansea City won the Best Individual Performance trophy, while the 2-1 EFL Cup victory over Chelsea at London Stadium was the Best Team Performance.

Signing of the Season went to Edimilson Fernandes, while Young Hammer of the Year was Declan Rice and Domingos Quina won the Dylan Tombides Award.

Bobby Moore OBE led his club to their first major domestic and European trophy before completing a unique, unforgettable hat-trick by captaining England to FIFA World Cup glory in 1966.

Born in Barking in 1941, Moore attended Westbury Primary School and Tom Hood School, Leytonstone, before joining the Hammers at the age of 15 in 1956

Two years later, having honed his game under the watchful eye of Ted Fenton and Malcolm Allison inside the Academy of Football, the blond-haired, ball-playing defender was handed his first-team debut at 17, in a 3-2 First Division win over Manchester United at the Boleyn Ground.

It was the beginning of a special career spanning nearly two decades at the very highest level, which encompassed winning the FA Cup, European Cup Winners' Cup, FIFA World Cup, 108 England caps and numerous other accolades.

Sadly, Moore passed away following a brave battle with bowel cancer in 1993, aged just 51, but his legacy lives on in the shape of the Bobby Moore Fund for Cancer Research UK charity.