Derby delight for Lanzini and Hammers 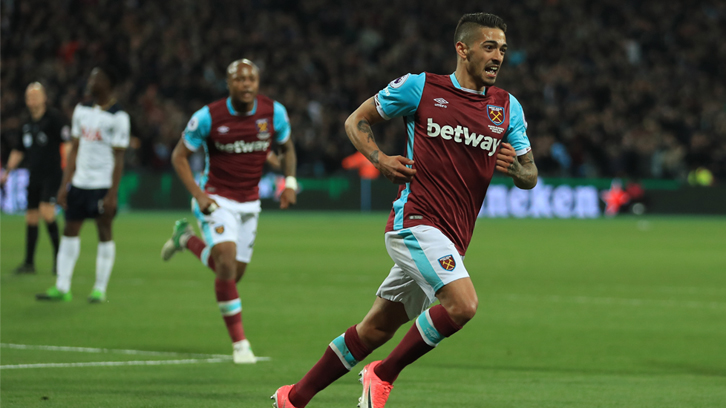 9:23pm, Friday 5 May – a moment in time which every Hammer inside London Stadium on Friday will remember in the future and say “I was there”.

For it was a moment – a brilliant moment – which summed up what West Ham United is all about, and in turn sealed an unforgettable 1-0 victory over title contenders Tottenham Hotspur.

That title challenge though, along with Spurs’ impressive winning run in the Premier League, is now probably over, and never will the home fans let Friday’s visitors forget that…

But certainly never to be forgotten is Manuel Lanzini’s winner, bagged half an hour from time, the only goal in a ferocious fixture.

The first half was everything you’d expect from a hotly-contested London derby – feisty and fiery.

The Hammers, roared on by the deafening atmosphere inside London Stadium, started on the front foot and nearly scored after just six minutes.

Manuel Lanzini was released by a superb Andre Ayew curled pass and, bearing down on goal, the Argentine could only fire wide with his left foot.

The next 15 minutes saw West Ham look the more promising, though it was Spurs who were to come closest to breaking the deadlock.

First, Kane’s long-range effort was fumbled by Adrian, and though Winston Reid blocked the follow-up from Alli, Kane hit one at goal for a third time in as many seconds and the Spaniard in goal cleverly flicked over with his foot.

The resulting corner also spelled trouble for the Hammers – Eric Dier met the Christian Eriksen delivery with a fierce header, but Adrian was again on hand to deny him.

A ferocious fixture between two rivals – there was always likely to be controversy, and that came on 27 minutes when West Ham felt Spurs should have had a man sent off.

Skipper Mark Noble, returning to the side, chipped through for Lanzini who again raced clear, and out came Hugo Lloris to stop the midfielder in his tracks – literally.

The Frenchman caught some of the ball, but with both feet in the air at the point of contact and as last man, Slaven Bilic on the touchline was not happy…

As they did in the first, West Ham started the second half on the front foot. Seven minutes in, a great chance presented itself when Sam Byram darted down the right and cut back for Ayew, but the Ghanaian fired over with the goal at his mercy.

For the next ten minutes, it was all Spurs as they dominated the ball and looked dangerous going forward. Adrian was again tested just after the hour mark when he tipped Son Heung-Min’s attempt round the post.

Then was the moment, the moment that sent London Stadium absolutely wild.

Cresswell’s ball in from the left evaded everyone and it looked as though the chance was gone. Byram, alive as ever, kept the ball in play though and, cutting it back to Ayew, the ball fell on a plate for Lanzini to smash in. Euphoria.

He loves scoring in London derbies does The Jewell, whose third goal in four matches against Tottenham was also his ninth strike in an all-London Premier League clash.

Time to wait. The elusive final whistle did eventually come, but not before the Hammers nearly extended their lead.

Substitute Ashley Fletcher went clear in injury time and nearly – so nearly – grabbed a second. Little did it matter.

Because soon after, Anthony Taylor put the whistle to his lips and off went the roof at London Stadium. What scenes, and what a night. And it all belonged to West Ham United.