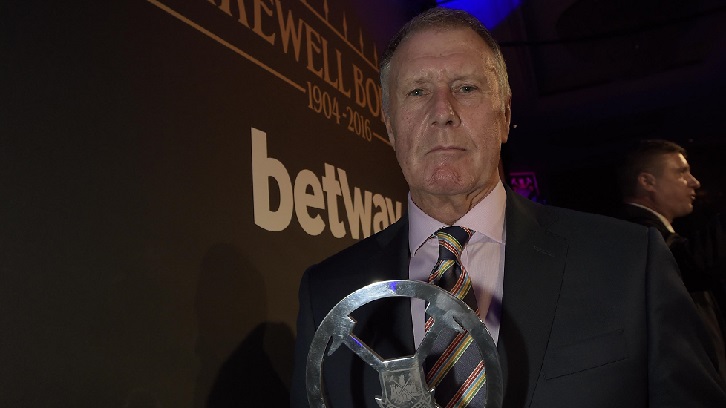 The Hammers welcome title-chasing Spurs to Queen Elizabeth Olympic Park for a derby match that has ramifications at both ends of the table, seeing as the hosts are seven points clear of the relegation zone and the visitors sit four behind leaders Chelsea.

West Ham’s home form has been up and down since they arrived in E20 last summer, with six wins and seven defeats from 17 home league games, but legend Sir Geoff is confident London Stadium will be positive for the Club’s long-term future.

“I’ve been saying for years – the move to London Stadium is fantastic for the Club,” Sir Geoff, who was presented with the Hammers' Lifetime Achievement Award in May 2016, told whufc.com in an exclusive interview.

“Yes, there were some issues with the stadium early on, which appear to have been resolved, and I know that some fans who go regularly have found it difficult to get used to the new surroundings and the differences with the Boleyn Ground.

“But atmosphere is linked to the performance of the team. I was at the Southampton game earlier in the season when we lost 3-0, and the reaction to that would have been no different at Upton Park!”

The Hammers have been roared on by the third-highest average attendance in the Premier League this season – 56,967 is behind only Manchester United and Arsenal – and enjoyed the support of 52,000 Season Ticket Holders.

Those loyal supporters will turn out in their droves again on Friday, when Slaven Bilic’s side will seek to repeat their home win over Mauricio Pochettino’s men from last season, when West Ham dented Spurs’ title challenge with a 1-0 win at the Boleyn Ground.

A sell-out crowd is expected, with many supporters taking advantage of the Club’s initiatives to ensure every seat is filled, namely the Ticket Exchange, Ticket Forwarding and Junior Season Ticket upgrade facilities.

The 1964 FA Cup, 1965 European Cup Winners’ Cup and 1966 FIFA World Cup winner, for one, has not been surprised to see the Hammers’ fan base respond to the stadium move so positively.

“The big issue was always whether we would fill the new stadium, having had 35,000 at Upton Park, and that worry has proven unfounded – we are getting nearly 60,000 every week and looking to increase [the capacity],” Sir Geoff observed.

“It’s one of the best stadiums in the country. If we improve the team, improve results and push on, I think it will be fantastic for us.”