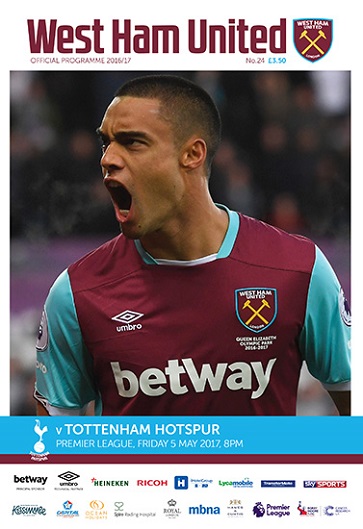 Winston Reid knows he and his West Ham United teammates will have their work cut out to slow the footballing juggernaut known as Tottenham Hotspur.

The north London side have won nine straight Premier League matches to maintain their title challenge, and go into Friday’s derby at London Stadium with an opportunity to close the gap to leaders Chelsea to a single point.

Reid, who will be determined to secure the win that not only slows Tottenham’s title charge but also secures the Hammers’ own safety, knows he, Jose Fonte, James Collins, Adrian and company will need to be on their games, both individually and collectively, if they are to stop Mauricio Pochettino’s men making it ten in a row.

“Dele Alli is a very good player, first of all,” Reid confirmed, when asked to identify Spurs’ dangermen. “He’s been able to do it in his second season, when sometimes you have young players who are able to do it for one season, and they can’t sustain it.

“He’s done really well again and that says a lot about his ability, and you can say the same about Harry Kane.

“In the first season he broke through in 2014/15, he scored a lot of goals, then he did it in his second season and now he’s done it in a third, so I think that shows he has some real quality.”

Kane has developed a reputation for being clinical in front of goal – a reputation borne out by the fact that 46 of his 88 shots have hit the target this season, while 21 of them have found the back of the net.

While he is not blessed with Jamie Vardy’s lightning pace, Andy Carroll’s dominant aerial ability or Romelu Lukaku’s unrivalled strength, the 23-year-old has developed a skill for finding space, positioning his body and getting his shots away – with either foot – in such a way that the ball is in the net before his marker or the goalkeeper can move.

With players like Harry Kane, you need to try to keep them with their back to goal for as much time as possible to make it difficult for them to score

“When we played them at White Hart Lane [and lost 3-2 to two late Kane goals in November], he didn’t have a shot on target for 89 minutes, then out of nowhere he had scored a penalty and another goal from open play and they had won the game,” Reid recalled, remembering a difficult afternoon in north London that ended with the No2 being sent-off late in added-time.

“That’s the type of player he is and that’s a positive for Spurs, because he doesn’t need a lot of chances to score his goals. He generally very rarely misses the target, so with players like that, you need to try to keep them with their back to goal for as much time as possible to make it difficult for them to score.”

Reid’s thoughts on Tottenham’s top attackers form part of an in-depth interview, which you can read in full in Friday’s 100-page Official Programme, available to pre-order now here, priced just £3.50.

Elsewhere, fans can read an exclusive interview with former West Ham and Tottenham goalkeeper Jimmy Walker, the latest updates from the Club’s Premier League 2, U18 and Ladies sides, and get the complete lowdown on the visitors.

If you prefer to consume your Official Programme on your tablet or smartphone, the Digital issue will be available to download from 9am on Friday here, priced £1.99.