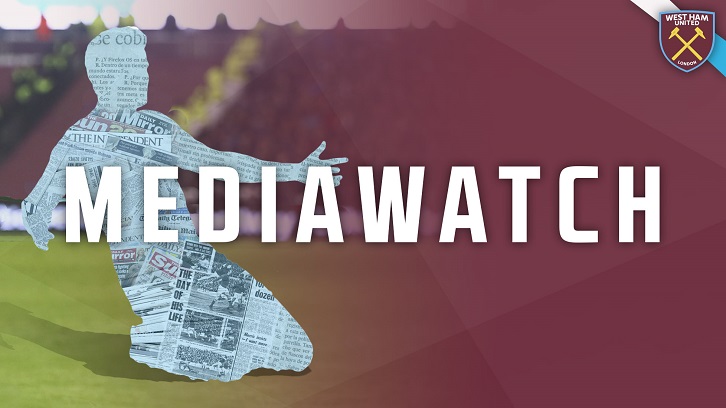 The bulk of today's national newspaper and online coverage of the Hammers is focused on manager Slaven Bilic...

Despite his contract having more than 15 months to run, the future of West Ham United manager of Slaven Bilic continues to hold a fascination for the national newspapers, broadcasters and websites.

On Wednesday, the speculation continued, with a variety of sources claiming different narratives.

Sky Sports cite their own sources to claim the Croatian boss retains the support of West Ham’s owners, despite mounting speculation surrounding his future, going on to say that 'West Ham's owners have a track record of staying loyal to their managers and there is a general acceptance at boardroom level that Bilic has had a lot to deal with this season'.

The tabloids take a different tack, with both the Mirror and The Sun suggesting the manager's position will be assessed at the season's end.

The Mirror's Darren Lewis writes that, while Bilic has the backing of his players and staff, Newcastle United manager Rafa Benitez is 'on the radar' of the Club's owners.

In his piece, The Sun's Daniel Cutts quotes an anonymous 'source' and claims the equation is as simple as 'West Ham will SACK beleaguered boss if they fail to finish in the top ten'.

The Daily Telegraph's chief football correspondent Jason Burt has a different take on things, writing that 'West Ham do not want to sack Bilic, who remains hugely popular and is a very capable manager, and there is an acknowledgement that he has had to cope with a difficult season'.

Burt continues by explaining that 'a review of Bilic’s position will take place at the end of this campaign – as is the usual policy at West Ham with their managers – although talk over him signing a new deal then, which emerged several weeks ago, has now been shelved'.

And on the same subject, the Evening Standard's Ken Dyer looks at the recent speculation around Bilic’s future and discusses the job he has done this season.

Moving onto team news and Burt's colleague Sam Wallace claims Michail Antonio is set to return from his hamstring injury as early as next week.

Telegraph chief football writer Wallace says the winger is ahead of schedule in his rehabilitation and his potential return against Arsenal on Wednesday 5 April is 'a welcome piece of good news for his manager Slaven Bilic as he faces a crucial run of games'.

Finally, young forward Domingos Quina - currently sidelined with an ankle injury - tells The Sun of his ambitions for the future.