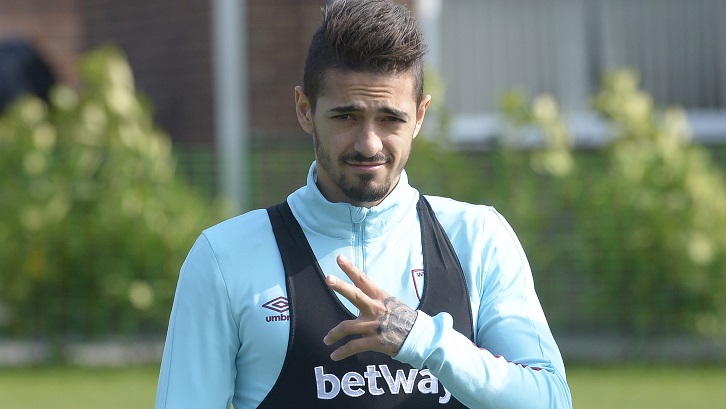 Manuel Lanzini is determined to help West Ham United put an end to their struggles at Hull City on Saturday.

The No10 has scored three times in the Hammers’ last five Premier League matches, but West Ham have gone winless in those games to slip to 12th in the table. Now, Saturday’s trip to Hull represents not only an important game against a side sitting in the bottom three, but also an opportunity to halt that winless run and the resulting slide down the table.

For Lanzini, who has hit form after the early part of his season was disrupted by a knee injury suffered while on international duty with Argentina’s Olympic squad ahead of Rio 2016, being relied upon by Slaven Bilic is a situation he will not shirk.

“The start of the season was particularly tough for me, with the Olympics I went to Argentina and picked up an injury and missed out on pre-season,” he recalled. “Halfway through the season things started picking up for me within the team. I’m now fit and confident and the coach has shown faith in me, as have my teammates.

“I feel like I’m an important player here and that’s just what I needed in order to be able to show what I am capable of on the pitch.

“I’m not feeling the pressure. I’m very comfortable with how things are going at the moment and feel like a very important part of the team, which is just what I wanted.”

West Ham’s recent results may have been indifferent, but their performances have arguably warranted a greater return than two points out of a possible 15.

Against West Bromwich Albion, only a last-minute goal denied them a win, while their performances against Chelsea and Leicester City at London Stadium warranted a point apiece.

If you look at the games before that, we played well against West Brom and Watford, particularly in the second half of those games, so I think we have been improving overall

“It’s true that we didn’t play well at Bournemouth in our last away game, when things didn’t really come off for us, despite the fact we knew they would press us very high,” he recalled.

“If you look at the games before that, we played well against West Brom and Watford, particularly in the second half of those games, so I think we have been improving overall.

“Conceding in the last minute is always a blow and, as a team, we can always work harder to stop that happening and to improve.”

Another player who will strive to improve West Ham’s fortunes is captain Mark Noble, who will likely return from injury at the KCOM Stadium to make his 399th appearance in Claret and Blue.

Lanzini, for one, knows how important the skipper is to the Hammers.

“It’s very important to have him around and I try to learn as much as I can by watching him.”