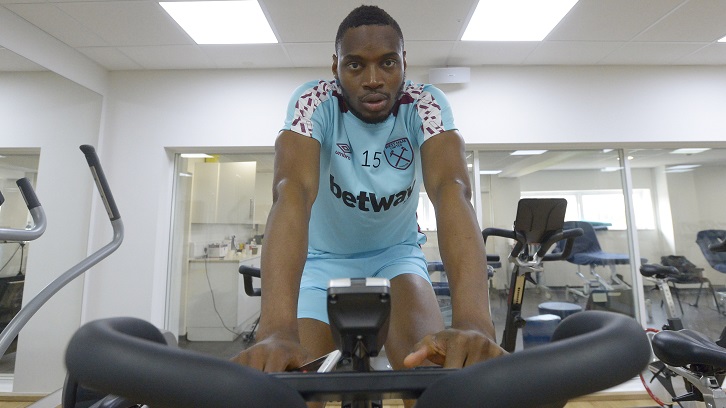 I would like to start by wishing Michail Antonio all the best with the England squad. It is always nice to have players being selected for their national teams and we have plenty of them, but as an English club is a good thing for us to have a player in the England set-up.

Injury-wise, we will be without Mark Noble this weekend. Mark picked up a knock in training and passed a fitness test to play against Chelsea. He pushed himself 100 per cent in that game, and then after a few days of recovery and improvement, he played again at Bournemouth.

Unfortunately, he picked up another knock in the same area of his body in that game and that took him out. He will also miss Saturday’s game against Leicester City too and a week of rest and rehab will help to prepare him for the three-game week coming up against Hull, Arsenal and Swansea.

We have 20 fit outfield players and three goalkeepers, so we are not in a bad place.

Angelo Ogbonna has stepped up his rehab and began running on Thursday at Rush Green following the patellar tendon operation he underwent in January.

He is still quite some time from a return to full fitness, but the story is positive and the rehab is going as well as we could possibly have hoped.

Angelo is an unbelievable professional and a very nice person, so he is a pleasure to work with in the rehab, which always accelerates the process. You know the old saying ‘A healthy mind in a healthy body’ and it has been a pleasure for our head physiotherapist Dom Rogan to work with Angelo on a one-to-one basis.

Domingos Quina unfortunately suffered a high ankle sprain and he is currently in the first phase of rehab, which is rest with his ankle immobilised in a walking boot. The next phase will start from Tuesday onwards.