Dicks - The boys have pulled together 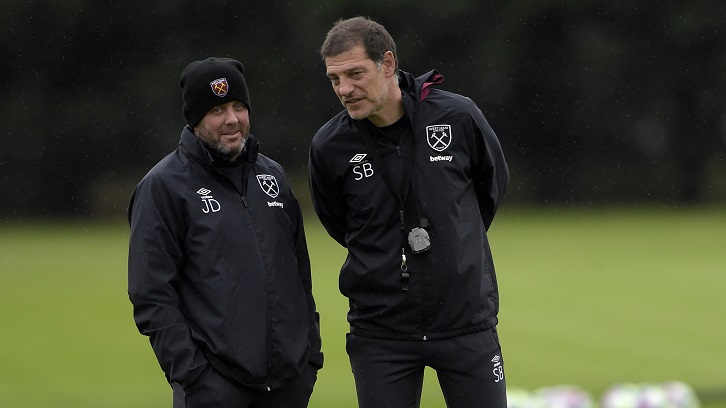 Julian Dicks says everyone at West Ham United is working towards the same goal ahead of Monday’s visit of Premier League leaders Chelsea.

The Blues visit London Stadium well clear at the top of the table, having lost just four matches in all competitions all season long. However, the Hammers are also in their best form of the campaign at present, having lost just three of their last 12 league matches to climb to the relative comfort of ninth.

Coaching assistant Dicks puts West Ham’s improvement down to the removal of distractions and the squad’s willingness to work hard for each other every time they take to the pitch.

“We’ve had some good results,” said the fans’ favourite. “Obviously, things weren’t so good when Dimi [Payet] was here, because everything was focused on him, but now he’s gone and we seem to have a better team spirit, to be honest. The boys have pulled together and results have shown that.

“You have to stick together because nobody is bigger than the Club. Yes, Dimi was a good player and, on his day, we miss him, but it isn’t about one player, but about the squad and we’ve come through that period at the moment and results are good.

“The boys are grinding out results as well. We went 1-0 down at Watford and came back and really dominated the game so, yes, things are good at the moment.

“We’ve always been a good team but a lack of work-rate was costing us in some games. We’ve got good players and they have been brought closer together. You can see that by the way they scrap for each other on the pitch and the way they work incredibly hard in training.

“They’ve all pulled together and the results have been good over the last two or three months.”

We’ve got good players and they have been brought closer together. You can see that by the way they scrap for each other on the pitch

Dicks is also pleased for manager, former teammate and long-time friend Slaven Bilic, who has silenced any doubters with his ability to come through a challenging period with flying colours.

“I’ve known Slav a long, long time and sometimes you have to bite your lip when people are saying things about you when they don’t know the reasons why.

“We talked and discussed the reasons why he had to make [the Payet situation] public, and one of those was for him, and the other was for the sake of the other players as well.

“When it came out about Dimi, it doesn’t matter who you are, if you disrespect the Club, the fans are not going to like it. That’s the way it is. A few players have done it and I’m sure there will be a few more in the future.

“The fans are fantastic and it was nice to hear them singing Slav’s name, not just once or twice but for the whole 90 minutes. It must give him a buzz, as well.”

*Don’t miss part two of our exclusive chat with Julian Dicks on Sunday afternoon, when the Terminator discusses his passion for London derbies with Chelsea.