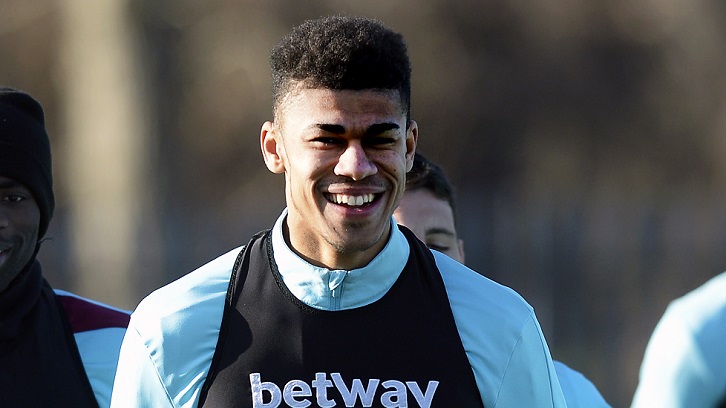 Ashley Fletcher is hoping history will repeat itself when West Ham United travel to Austria in July.

The young centre forward arrived from Manchester United a year ago and immediately made his mark, scoring in pre-season fixtures with FC Slovacko and Karlsruher SC in the Central European country.

While speculation continues to grow over the possibility of the Hammers bringing in a big-money forward this summer, Fletcher himself is hoping to impress when Slaven Bilic’s squad return to the Alpine nation this summer.

“It was the same last year, as everyone was saying we need a £20m striker but they are hard to come by,” said Fletcher, who netted his first competitive goal for West Ham in an EFL Cup tie at his former club in November. “It’s not easy to go out and find a player who can score goals regularly in the Premier League, especially those who come in from abroad.

“As a young player making my way through, if I am given an opportunity and a run in the team, I think that can only benefit me.”

Hopefully this season I can get even more game-time, as my ambitions are to play and do well for this massive Club

Fletcher cited the examples of his long-time Manchester United colleague Marcus Rashford and Tottenham Hotspur’s Harry Kane, both of whom are young English strikers who have established themselves in the Premier League as two to attempt to emulate.

“I look at Marcus Rashford, for example, who has taken his chance and stayed in the team and he’s probably now one of the best strikers in England,” the 21-year-old observed. “The same can be said for Harry Kane as well.

“There aren’t many young English strikers playing in the Premier League, so hopefully this season I can get even more game-time, as my ambitions are to play and do well for this massive Club.

“Last season was a learning year for me, so I’ve been away and worked on getting fitter and stronger over the summer as I want to come back firing in pre-season.”

Fletcher added that the support of the Claret and Blue Army would continue to aid him in his quest to become a first-team regular.

The attitude and talent shown by the No24 last season won recognition from West Ham fans, and he is eager to repay them by hitting the back of the net in the future.

“As a young English player, having the fans behind you gives you a massive boost,” he confirmed. “I’ve just got to keep proving to the manager that I deserve minutes and when I get on the pitch, I need to show what I can do and show the fans why I should be playing.

“They’ve been fantastic since I got to the Club, they’ve really got behind me and I can only thank them for supporting me.”