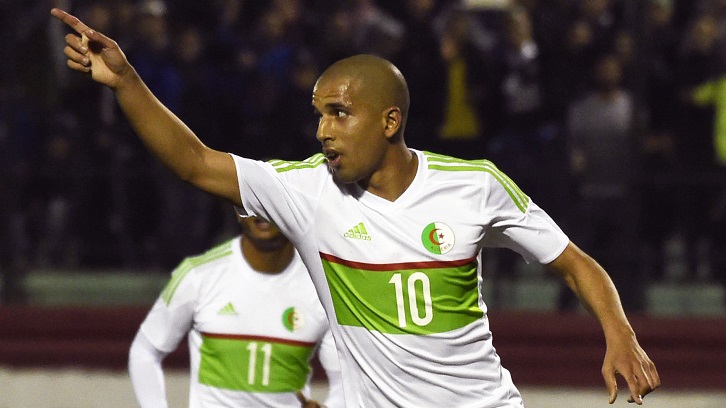 Sofiane Feghouli made a successful return to international duty as Algeria edged out Guinea 2-1 in a friendly on Tuesday night.

Wearing the No10 shirt, the West Ham United winger was introduced as a 73rd-minute substitute in the match, which was played in the Algerian city of Blida, with the scores level at 1-1.

Feghouli, who ended the 2016/17 season with a fine performance and a goal in the 2-1 final-day Premier League victory at Burnley, replaced Leicester City’s Riyad Mahrez at the Mustapha Tchaker Stadium.

The lively Hammer was heavily involved in his 20 minutes on the pitch and went close to adding to the eleven goals he has netted for the Desert Warriors when he burst into the penalty area and fired narrowly wide just moments after his introduction.

The 27-year-old was returning to Algeria duty after missing his country’s last four international fixtures, making his first appearance since a FIFA World Cup qualifying defeat in Nigeria in November, and earning his 43rd cap.

Algeria struck the winner with 12 minutes remaining when a deflected cross was expertly converted on the half-volley by Dinamo Zagreb’s Hillel El Arabi Soudani. Earlier, Sofiane Hanni of Anderlecht had put the hosts in front, before Demba Camara of Paris FC levelled.

Feghouli, who made his debut against The Gambia back in February 2012, will hope to earn cap number 44 when Algeria host Togo in a second friendly international in Blida on Saturday 10 June at 10pm BST.