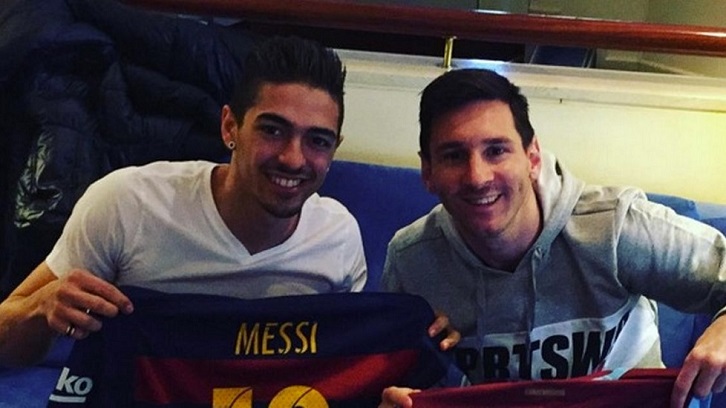 Manuel Lanzini is in optimistic mood as he prepares to make his Argentina debut alongside Lionel Messi on Friday.

West Ham United’s No10 is set to make his senior international bow for Argentina against arch-rivals Brazil in front of 70,000 fans in Australia.

For Lanzini, who has spent the week training alongside the likes of Lionel Messi and Paulo Dybala, his maiden call-up and potential bow for La Albiceleste come at the end of a stellar season in Claret and Blue.

Now, he intends to continue his recent form by impressing new Argentina manager Jorge Sampaoli – the former Chile and Sevilla boss – when he steps on to the pitch at the Melbourne Cricket Ground.

“I am more than happy,” he revealed. “I was hoping for this, I think I was playing well and I am lucky to achieve it.”

Lanzini said his call-up was reward for his impressive 2016/17 campaign, in which he scored eight goals in 39 appearances, including vital winners against Crystal Palace and Tottenham Hotspur, and was voted Players’ Player of the Year.

The Buenos Aires-born player has the ability to play across the attacking midfield line and, with the likes of Messi, Dybala and Angel Di Maria also in the squad, his versatility will be valuable to Sampaoli.

He is the best player in the world and we are lucky as he is Argentinian. We need to take advantage of this

“I am more mature now,” said the 24-year-old. “I am more stable, which is very important. I also have more personality. I am feeling good and have confidence.

“I am sometimes playing as right winger and sometimes in the middle – it all depends the way we play at West Ham.”

“I like [Sampaoli’s] style as he is a manager that plays good football. I will do whatever he tells me to do it and I will try to do my best.”

Whatever happens on Friday, and in Argentina’s second friendly in Singapore on Tuesday 13 June, Lanzini has relished sharing the training pitch and dressing room with Messi.

The pair met in Barcelona last year and Messi recently posted a photo on social media showing his West Ham shirt among those he has swapped throughout his illustrious career.

“It is a double satisfaction [to be called-up and working alongside Messi],” Lanzini confirmed.

“He is the best player in the world and we are lucky as he is Argentinian. We need to take advantage of this.”