Rice – I want a West Ham career like Noble 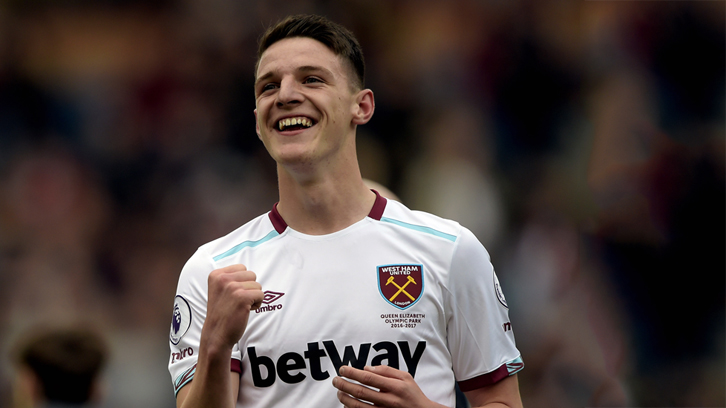 Promising West Ham United centre-back Declan Rice wants to follow in the footsteps of the likes of Mark Noble and become a Hammers legend at London Stadium.

The Republic of Ireland youth international – like the current West Ham captain 12 years ago – was this season named the Club’s Young Hammer of the Year after a superb breakthrough campaign.

As skipper, Rice guided the U23 side to Premier League 2 promotion via the play-offs, missing just two league matches all season, while also featuring on the first team bench as the season reached its climax.

Then, on the final day of the term at Burnley’s Turf Moor, the 18-year-old made his senior debut, replacing Edimilson Fernandes in the final minutes of Slaven Bilic’s outfit’s 2-1 win.

The first team bow – as well as the Young Hammer of the Year accolade – was the icing on the cake for Rice after a marvellous year.

“The award just topped off the season perfectly for me, to be honest,” he said. “Then, to go on and make my debut afterwards was even better. I never thought I would win that award.

“Being Ireland’s U17 Player of the Year this year after getting the Dylan Tombides award the year before – it’s been amazing.

“Some big names have won the award before, like Nobes earlier in his career. The guys who have won it in the past have gone on to have good careers, too, and Nobes has played 400 games for the Club.

“Hopefully I can make my mark in a similar way to him. I have always wanted my career to be here since joining from Chelsea. My heart has been with West Ham every day since then, and that feeling is always growing.”

Some big names have won the award before, like Nobes earlier in his career. The guys who have won it in the past have gone on to have good careers, too.

Rice’s rise has come about quickly – last month, the teenager trained with the Republic of Ireland senior squad ahead of their June international matches.

And just last season, the defender was an U18 regular but was limited to just appearances from the bench for the Development Squad, managed by Academy Director Terry Westley.

“Having mostly played U18s, to come into the U23s this year as captain and win promotion is incredible,” the youngster continued. “With the likes of Terry, along with Liam Manning, Mark Phillips and Steve Potts in the Academy, they push me every day and want the best for me.

“I was a bit nervous going into the U23s. It was nerve-wracking coming on as a sub last year, trying to show what you can do in the minutes you get.

“This season, it’s been totally different. I’ve been going into U23 games knowing that I’m going to play well. I think that I have solved that problem this season – I have achieved good things in the U23s.

“So, obviously we’ll see what happens, but it might be my time to go out on loan next season and have a good challenge while getting senior experience.”

If a loan move next season is the next step for Rice, there are plenty of his teammates he can call upon for advice.

Josh Cullen – notably – enjoyed a superb 2016/17 campaign in League One with Bradford City on loan, starting regularly in central midfield and helping the Bantams reach the play-off final at Wembley.

“The way Josh has played for the last two years at Bradford has been unbelievable,” said Rice on his compatriot. “He’s someone for everyone in the Academy to look up to.

“If I do go out on loan, hopefully I can make as many appearances and impress as much as Josh has.

“Playing either in the Championship or League One has to be the aim. It would be a perfect way to gain experience and learn.

“That’s definitely the aim if I can’t break into the first team on a regular basis.”