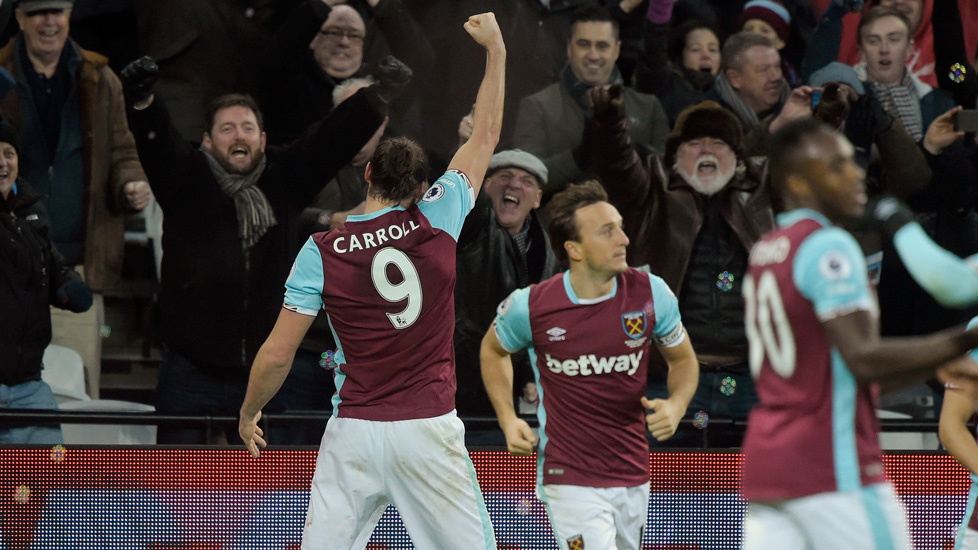 Andy Carroll believes he and the Claret and Blue Army can forge a powerful combination at London Stadium next season.

The West Ham United centre forward paid tribute to the Club’s loyal and noisy fans for inspiring them through a challenging 2016/17 campaign, pointing to the support they gave during vital home wins over Crystal Palace, Swansea City and Tottenham Hotspur this year.

Carroll repaid that support with his unforgettable Goal of the Season against Palace, when he took to the air to scissor-kick Michail Antonio’s cross high into the Eagles net to complete a 3-0 victory.

With the same combination working together next term, the No9 believes the Hammers can turn London Stadium into a fortress.

"London Stadium has obviously got the potential to be one of the greatest in the league,” said Carroll, who announced this week that he is expecting a second child with fiancée Billi Mucklow. “It takes time, like every new stadium, and hopefully next season we will just build on it.

"I thought the noise also gave the lads an extra bit in our win over Spurs. The games we have won and played really well were down to the noise fans getting behind us. You can hear it on the pitch as well.

“There is more to come from me personally, too. I need to stay clear of everything and kick on.”

The games we have won and played really well were down to the noise fans getting behind us. You can hear it on the pitch as well

Reflecting on his memorable strike against Crystal Palace, Carroll had no hesitation in lauding the goal as the best of his professional career.

The big Geordie is no stranger to scoring memorable goals, but his acrobatic effort in such an important home victory topped the lot, according to the man himself.

"I love watching that goal and I love people asking me when was the last time I'd seen it!" Carroll smiled. "It's been a few days since I've seen it, but I'm happy I won the award and it was a great goal and a great win!