Collins: I want to end my career at West Ham

As he prepares to commence his tenth season as a West Ham United player, James Collins admits there is one ultimate aim that drives him on – to finish his career in a claret and blue shirt.

The hugely-popular Welsh defender, who spent four seasons at Upton Park between 2005 and 2009 before rejoining the Club in 2012 following a spell with Aston Villa, will turn 34 in August and has one year left remaining on his contract at London Stadium.

However, Collins, who will make his 200th appearance in all competitions for the Hammers if he lines up against Manchester United at Old Trafford on the opening weekend of the 2017/18 Premier League campaign, proved last season that he remains as committed and reliable as ever at the heart of Slaven Bilic’s defence.

“To think I’ve been a part of this Club for nearly ten years now is incredible,” he says. “It’s been a major part of my life – I met my wife here, so my family are from the area, and I’m a very lucky boy to have been at such a good club for so long. And hopefully it can continue.

“I’d love to finish my career here. I’m 33 now, but I felt at the end of last season that I was playing as well as I ever have.

“I’ve come back for pre-season fit, I’m lucky that I haven’t had any really major injuries in my career, and I feel really good.

“I’m going into the last year of my contract, but I believe there is a lot of football left in me at this level and I’d love to stay here for years to come.”

For Collins, the short term aim is simply to carry on where he left off last season.

After returning to the side in April following injury to Winston Reid, he played a key role as the Hammers finished the campaign in strong fashion, losing only once and keeping four clean sheets in their final seven Premier League matches.

A particularly epic defensive performance in the crucial 1-0 win over Swansea at London Stadium further enhanced his already heroic reputation among the claret and blue faithful, and Collins is determined to show those qualities again next season.

“I was delighted with the way I was playing towards the end of last season,” he says. “I came into the team when we were still looking over our shoulders a little bit.

“We steadied the ship, though, my form was good and, to be honest, I was a little bit gutted to be going off at the end of the season – I would have liked it to carry on a bit longer!

“I’ve kept my fitness over the summer, though, and I’m really looking forward to the new season.” 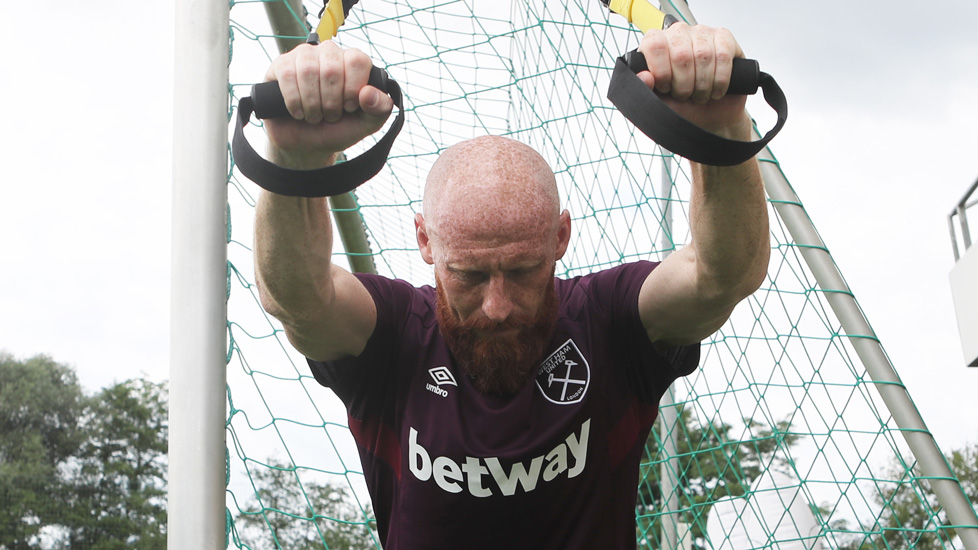 As Bilic’s men continue the hard work at their pre-season training camp in Austria, it is clear to see the positive and valuable influence that Collins has on everyone around him, including both players and backroom staff.

As the most senior member of a relatively young squad, his experience and guiding voice on the pitch is a vital element, while his sharp wit and humour can provide a sound test of character for anyone on the receiving end. And while the training pitch and dressing-room can be an unforgiving environment at times, it is the likes of Collins who ensure that the crucial balance between serious hard work and team spirit is just right.

“It’s got to be like that,” he says. “You come away and it’s a competition to get in the team, you want to get an edge on the boys and prove yourself to the manager.

“There is a lot of friendly banter, though – it’s about trying to enjoy the hard work to get yourself through it.

“We’ve always had a great team spirit here and it’s no different out here. We’ve got a few of the young lads with us to experience being around the first team environment, and that will benefit them and the club in the long term.

“I was a young player once – a long time ago! – with some great older pros around who showed me the ropes, and if I can do that for the lads who are here then great.”