Reece Burke is eager to catch the eye after returning to West Ham United for pre-season training.

The promising centre-half endured a frustrating 2016/17 season on loan at Championship club Wigan Athletic, where a hip problem restricted him to ten appearances.

Now fit again, Burke has been training alongside the first-team squad for the past few days after having plans for a season-long loan put on hold by manager Slaven Bilic. The 20-year-old may yet be sent out to gain more experience, but for now he will remain in Claret and Blue and is aiming to impress the manager. 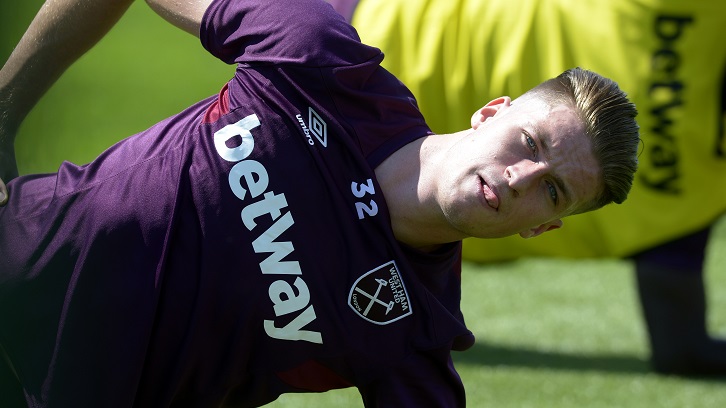 “I’m buzzing to be here,” he confirmed. “I was going to go on loan, but that has been put on hold as the manager has told me he wants me to do pre-season here with the first team, so it’s a good opportunity for me to get back in with the lads, as I’ve been away for a while now.

“I spoke with the gaffer and he wants me to stay here, so it’s a good opportunity for me to work hard and show him what I’ve got, because obviously I haven’t seen him for a while.

“I need to stay fit and have a good pre-season here, that’s my target.”

I spoke with the gaffer and he wants me to stay here, so it’s a good opportunity for me to work hard and show him what I’ve got

Burke’s injury-affected season was even more exasperating when you consider the progress he had made over the preceding 18 months.

Then just 18, the Newham-born player started the final five Premier League matches of the 2014/15 campaign, scooping the Young Hammer of the Year award. He then won Player of the Year honours with loan club Bradford City after a sensational League One season in 2015/16.

“That seems long ago for me as I’ve had two seasons out on loan since then,” he recalled, when asked for his recollection of his early Hammers appearances. “At Bradford, it went well and I won Player of the Year and picked up quite a few trophies, so it was a good season for me there and a good experience.

“Last season wasn’t the best season for me, as I picked up quite a few injuries, but I still managed to play a few games in the Championship, so I know what it’s like and what I’ll be up against if I do go on loan again.

“My ambition is to play in the Premier League and to do that you have to go on loan and get experience and, if I have to do that to develop, that’s what I’ll do.”

Burke partnered James Collins in his five Premier League starts back in spring 2015 and he is looking forward to spending time with Ginge on the training pitch again.

With Jose Fonte, Angelo Ogbonna and Winston Reid also travelling to Austria for the Hammers’ first pre-season camp, there will be plenty of experience for the youngster to draw upon.

“I was young then and I’m still quite young now, so I’m still developing into a man,” said Burke, who also started both legs of last season’s UEFA Europa League Play-Off round tie with Astra Giurgiu. “It was good that I played back then and got the experience of playing in the Premier League alongside first-team players and older players, because you learn off them.

“It’s good to be back here because there are quite a few good centre-halves here and I want to learn off them.

“They are top players and top centre-halves and I’m looking forward to being around them in pre-season. When I did play in the Premier League, I played alongside Ginge and it’s crazy how much playing alongside an experienced centre-half can help you. I learned a lot in those five games.”