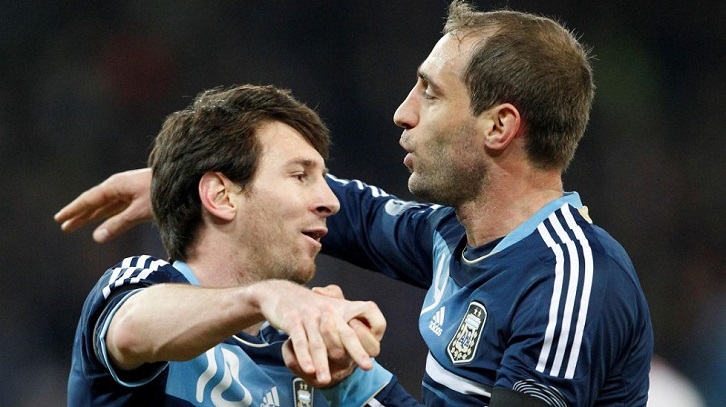 The duo made their international debuts in the same year, 2005, won Olympic Gold together in 2008 and reached the FIFA World Cup final as teammates in 2014.

West Ham United’s summer signing joined the likes of Neymar, Luis Suarez and Gerard Pique who travelled to the city of Rosario to witness Messi’s marriage to Antonela Roccuzzo.

“It was really good,” Zabaleta told West Ham TV. “It was a special moment to be there with Lionel Messi, of course, and some of the players who have been playing with him for so many years with the Under-20s, Olympic Games and the senior national team.

“This was one of the most-important moments of his life, as it is for everyone who gets married, and it was fantastic.

“We saw Lionel so happy and enjoying himself with all the lads and also his wife and kids as well, so it was a really good time.”

As a token of thanks, all 260 guests received a bottle of Leo Malbec, the wine created to raise money for the Barcelona superstar’s charitable Foundation.

Among them were many of the players who have shared in Messi’s amazing career, including Argentina strikers Sergio Aguero and Ezequiel Lavezzi and Messi’s former Barcelona teammates Xavi, Cesc Fabregas, Samuel Eto’o and Carles Puyol.

“Lionel has a Foundation in Argentina which is really big, so some of the players have given some money to that!” Zabaleta proudly confirmed.

“We got a bottle of really good wine, a Malbec, which Lionel has put his name on the bottle. It was a big, big bottle of Malbec which was hard to bring back to England, because I had too much stuff in the luggage.

“Of course, I’ve kept that bottle of wine in Argentina so next time we go back there, I will open it and enjoy a few glasses with the family!”

The club’s home ground, the Estadio Municipal de Arrecifes, and football library in the town’s cultural and educational centre have also been renamed in honour of West Ham’s widely-respected new No5.