Hammers legend McAvennie's back in town! 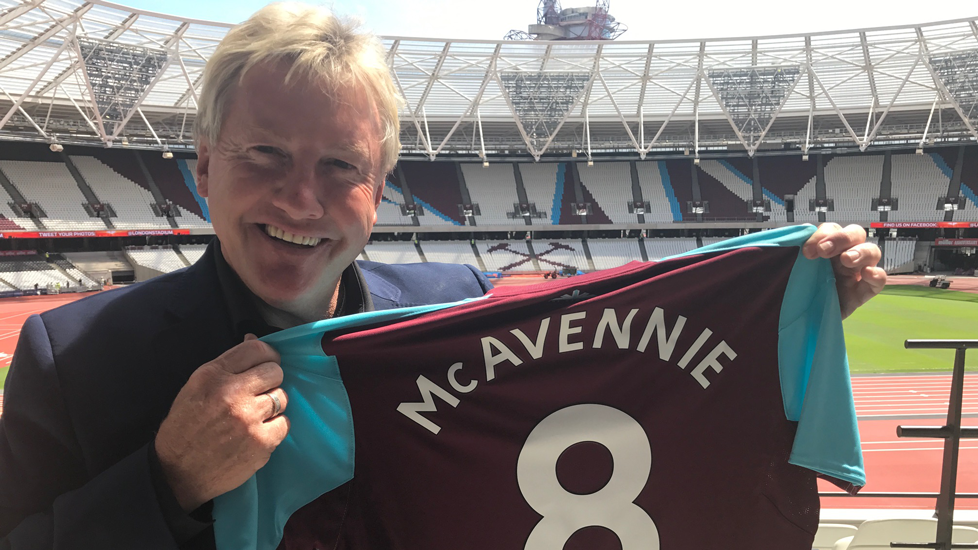 West Ham United legend Frank McAvennie made his first visit to London Stadium on Friday morning and admitted he can’t wait to get back again for a match next season!

Frank, now 57 and living back in his native Glasgow, was in town to attend the opening of a new restaurant in Stratford and couldn’t resist hopping across the Queen Elizabeth Olympic Park to get his first taste of the Hammers’ home.

“I’m delighted to be here,” said Frank. “It’s the first time I’ve had a chance to get to the stadium because I’ve been so busy over the past year.

“It’s obviously very different to what I was used to at the Boleyn Ground, but it’s the future of West Ham United and the fans are getting more and more used to it.

“I’m really looking forward to getting back here for a few games next season and meeting up with the fans again.”

The former Scotland international, who joined the Hammers from St Mirren for £340,000 in August 1985, became an instant Upton Park crowd hero during his debut campaign, and insists the claret and blue faithful are still as special as they were then.

“I watched the Tottenham game at the end of last season and the atmosphere was great,” he said. “Hopefully next season will bring a lot more memories like that.

“If the team give 100% every week, the fans will back them. To have sold out 52,000 Season Tickets six weeks before the start of the season is fantastic, and tells you everything you need to know about West Ham supporters.”

Frank, who famously bagged 28 goals during that record-breaking 1985-86 season, keeps a close eye on the Hammers’ fortunes from north of the border, and is hoping that a new goalscoring hero goes on to emulate his achievements next season.

“It’s no secret that the Club are looking to bring in a striker or two,” he said. “There are obviously a lot of names being mentioned but I’m sure that the manager has got his targets and the Chairmen will be working hard to get deals done.

“Part of the reason for moving to London Stadium was to attract better players and if I was a young player now, I’d be desperate to ply my trade here.

“West Ham are a club who should be up there challenging in the top half of the table, and if they can bring in a couple more new faces then I’m sure they can achieve that target next season.”