Carroll at the double in Teesside win 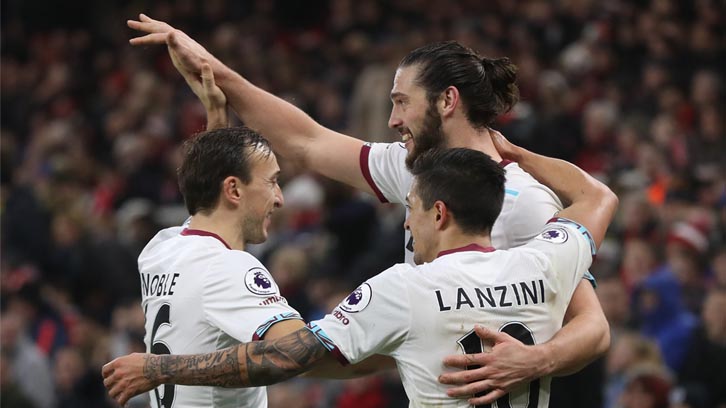 After last weekend’s heroics, it was back to the day job, so to speak, for Andy Carroll as his brace helped West Ham United to a 3-1 win over Middlesbrough at the Riverside Stadium on Saturday.

With his cracker against Crystal Palace – one of the Premier League’s greatest ever – still fresh in the memory, the Hammers’ big forward was back doing what he does best on Teesside as he crashed home an unstoppable header before bagging a second from close range.

Cristhian Stuani’s strike sandwiched between Carroll’s double meant the hosts continually pressed during a tight second half, but Slaven Bilic’s held on before adding a late third through substitute Jonathan Calleri - who found the back of the net for the first time in Claret and Blue - in injury time.

It’s bubbles that fly so high according to the song, but after just nine minutes it was most definitely the Hammers’ big man up front touching the sky as he nodded home the opener.

Manuel Lanzini swung in an inviting corner from the left hand side which had been won by Michail Antonio, and nothing was getting in Carroll’s way as he steamed in before planting a header past Victor Valdes in goal.

And though it was an early lead, it could have been greater had Antonio converted from close range minutes earlier. The threat throughout could only miscue from six yards after Aaron Cresswell’s cross.

Delight can quickly turn to despair in the Premier League though, and so Slaven Bilic’s men learned with 26 minutes played.

Adama Traore was allowed the the time and space to charge down the right and pick out a cross and, on his own at the back stick, it would have been harder for Cristhian Stuani to miss from eight yards as he tapped past Darren Randolph to level.

Time to dig in. As the hosts applied the pressure, West Ham stood firm despite one or two scares. Traore was again the danger down the right, though this time his driven centre across the face of goal found white rather than red.

Moments earlier, skipper Mark Noble had audaciously chipped inches wide, but if the Hammers’ luck was out then, it returned to them two minutes before the break as they once again took the lead.

Antonio worked the room for a shot and although Spaniard Valdes was this time able to deny the forward, he pushed it only as far as Carroll who tapped under the stopper.

Happy Hammers indeed at half time, though things could have got even better as the second half began in the same lightening fashion the first.

First Antonio nodded over from a corner, before then Lanzini went through on goal only to tamely fire into the hands of Valdes.

West Ham must have known it was going to be their day just after the hour mark, when Boro came inches away from equalising for the second time.

A cross from the left found its way to the back post where Cresswell, unaware of the onrushing Stuani, directed his clearance straight at the winger and against the crossbar.

Previously, Randolph in goal had produced a marvellous save to deny Marten de Roon, but the Irishman was not tested further as the travelling east Londonders kept it tight at the back before breaking in the 94th minute to put the icing on top of the cake.

A slick passing move, in which white shirts far outnumbered red, ended with sub Calleri finding the back of the net with the help of a deflection to score his first West Ham goal and ensure the points were heading back down south.

And so into the top half the Hammers went – for just the second time this season – after vital back to back Premier League wins. The Irons have started 2017 as they mean to go on.