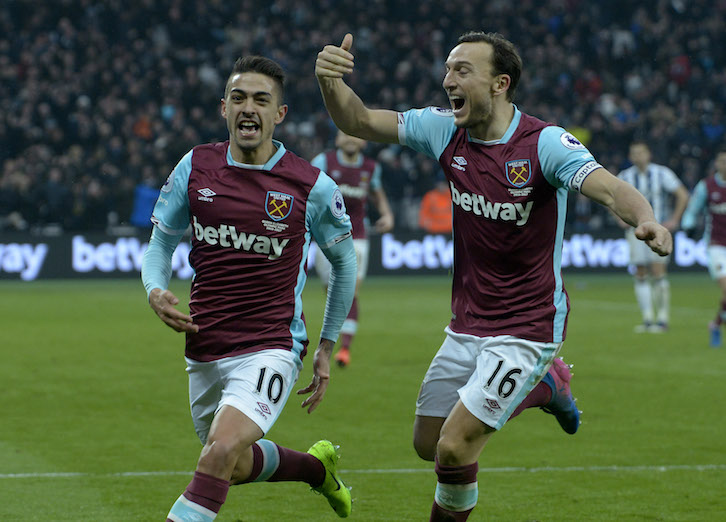 Manuel Lanzini looked a different class as West Ham United were unlucky to draw 2-2 at home to West Bromwich Albion on Saturday afternoon.

The Argentinian bagged the fans Man of the Match award on Twitter, an assist and the 86th minute goal, before late-heartbreak struck when Gareth McAuley headed home in stoppage time for the visitors.

Without a recognised striker, Lanzini superbly shared the responsibility of leading West Ham’s attacks along with Antonio, Snodgrass and Feghouli. The four were a constant threat to West Brom's back-line throughout the second half.

Sofiane Feghouli eventually got the equaliser in the 63rd minute as the Hammers enjoyed a host of second half chances, with Lanzini at the heart of most attacks. By full-time, Manu had topped the Hammers’ successful dribbles charts with four, had made the third most touches of the ball (80) and had more shots on goal than any other player on the pitch (four).

As West Ham enjoyed over 65 per cent possession on the day, the man making things tick was of course Lanzini. His pass completion rate eventually stood at an outstanding 93 per cent.

As time ran down, the only thing missing from his near-flawless performance was a goal; and with less than four minutes remaining, Manu stepped up to deliver the game’s best finish. Cutting in on to his weaker left foot, he struck the ball powerfully and low in to the bottom corner leaving goalkeeper Ben Foster rooted to the spot.

It was Lanzini’s fifth Premier League goal this season and his second against West Brom, having scored at The Hawthorn’s in September as well. In total, the 23-year-old has created 27 key chances this season – more than any other Hammers player.

For West Bromwich Albion, they spent much of the game without the ball (34.8 per cent possession) and had half as many shots as West Ham United (eight). Nacer Chadli and Solomon Rondon shared four shots between them, while Gareth McAuley’s nine defensive clearances was the most by any player.

Unlucky to draw, but there were still plenty of positives to take from Saturday’s performance – not least that of Manuel Lanzini. The Hammers are now not in action until 25 February when they visit Watford’s Vicarage Road. Slaven Bilic’s side will hope to continue the form which has seen them take ten points from a possible fifteen since early January.

For more stats from Saturday's draw, or any game this season, visit our Match Centre!