West Ham United are delighted to announce that Andy Carroll’s stunning wonder strike against Crystal Palace has been named January’s Goal of the Month.

The big No9’s acrobatic effort capped off a flowing move which helped the Hammers to an emphatic 3-0 victory over the Eagles at London Stadium.

Carroll fought off strong competition, including Olivier Giroud’s scorpion-kick, to win the coveted award, which was decided by a combination of a panel of experts including Sir Alex Ferguson and Thierry Henry, and a public vote. 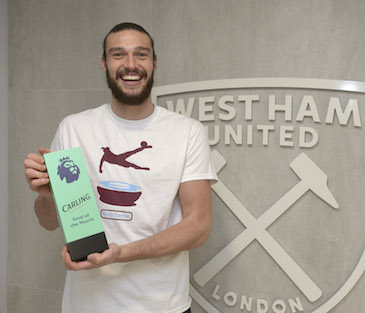 Speaking after picking up the award, Carroll beamed: “I’m delighted to have won the Goal of the Month competition, especially given how good some of the other goals were.

“As soon as I hit it I knew it was in, I got a good connection and knew it would hit the back of the net. It’s definitely the best goal I’ve ever scored, one I’m very proud of.

“I enjoy every goal I score, but that one was certainly a little bit more special – I don’t think I’ll ever get bored of watching that one back.”

Since netting his spectacular strike, Carroll has enjoyed an impressive run of form, scoring twice against Middlesbrough as well as netting away at Southampton – a total of four goals in as many games.

Following Dimitri Payet’s success in October’s competition for his mazy solo effort against Middlesbrough, which was also scored at London Stadium, Carroll’s January triumph doubles the Hammers tally – the only side in the Premier League to boast two winners so far this season.