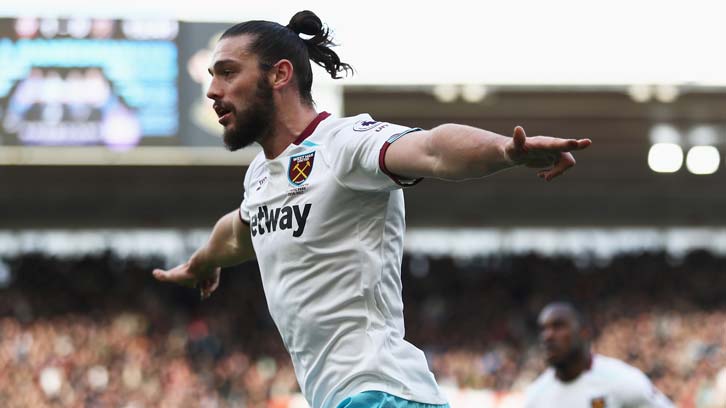 Since returning from injury in early December, few defenders have been able to keep Andy Carroll down.

In notching West Ham United’s equaliser in Saturday’s eventual 3-1 win at Southampton, Carroll extended his hot streak to a fourth goal in 2017 and six in just twelve Premier League matches.

With a better minutes-per-goal ratio this season than the likes of Alexis Sanchez and Zlatan Ibrahimovic, Carroll has every right to be happy with his form at present – especially with the team rejuvenated and up to ninth in the table.

“It was a good result for us on Saturday,” he said. “We didn’t deserve to go 1-0 down, but when we did I think it changed the game for the better.

“We realised we were in a game, pushed up and got a goal straight away for myself. I was well chuffed with it, we carried on and got another just before half-time.

“It was important to cancel out their goal so quickly. We couldn’t worry about what happened, we had to carry on going forward and playing our game. That’s exactly what we did.

“It was a perfect ball from Pedro. He just slipped it in, and with a little movement around the back I got the space to finish in the bottom bin with my right foot.

“I’m happy with how it’s going in front of goal for me at the minute. It was probably one of the only chances I had in the game, so it was nice to put it away.

“Pedro’s goal came at a great time too, right before half-time, and it was a great finish. He’s had an assist and a goal – I think all the lads played well – but for him with the assist and goal it’s fantastic.

“We’ve been playing well lately. We’ve bounced back straight away from the Man City game and proved that we’re playing well by getting three points. We’ve got a very good team and we’re always capable of winning games.”