Slaven Bilic was a happy man after watching his West Ham United side climb to ninth in the Premier League with a 3-1 win at Southampton.

The Hammers scored their first-ever victory at St Mary’s courtesy of goals from Andy Carroll and Pedro Obiang before half-time, and Mark Noble’s deflected free-kick seven minutes after the break.

After losing 4-0 to Manchester City in midweek, Bilic’s team could have crumbled when Manolo Gabbiadini blasted the Saints into an early lead, but Carroll levelled within two minutes and West Ham went on to complete their first come-from-behind win since the Final Game at the Boleyn Ground.

“It was fantastic,” said the manager. “We had a plan and the guys executed it brilliantly, basically. They scored a great goal through Gabbiadini, which looked brilliant from the other end of the pitch.

“But we didn’t give up, we continued to play and they let us play a little bit. To equalise very quickly obviously helped us and picked us up and basically it was a great team performance.

“We were solid, great defending in numbers, closing them down and when we could press them, we pressed them. With the ball, we had pace up front, bodies up front, presence up front and we also had great combinations and switched sides from the back.

“It’s not only three points, but it was a really great performance and I’m so proud of the boys. As I said, it was just a fantastic team performance.”

We had a plan and the guys executed it brilliantly, basically 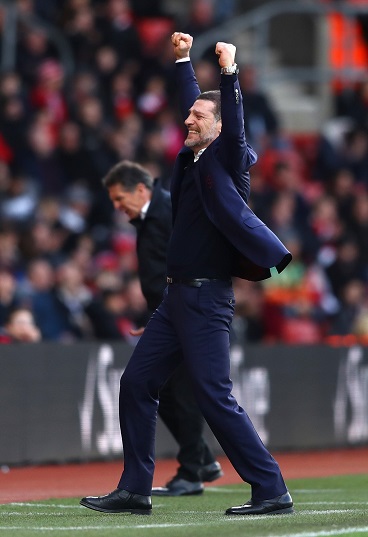 West Ham made it ten goals in their last three away matches and ten points from five after drawing 2-2 at Liverpool and winning 4-1 and 3-1 at Swansea City and Middlesbrough respectively.

A first victory at Southampton since November 2000 also more than doubled the number of points the Hammers have rescued from losing positions this season from two to five, taking them back into the top half into ninth place in the process.

“It makes it a little bit better!” the manager smiled. “It was a good away trip. They have played some good football this season and started the game one point below us, so it was one of those for both of us that was a six-pointer.

“It’s extremely important at this stage of the season because all the crazy results have started to happen. We have to approach every game like it is our last game and, with a little bit of luck, we can continue to play like this or even better and we will be OK.”

With the lack of a fit right-back and the return of Cheikhou Kouyate from the Africa Cup of Nations, Bilic reverted from a 4-4-2 to the 3-5-2 formation which had served his side well earlier this season.

With Southampton outnumbered in midfield, West Ham kept possession well and looked comfortable for the vast majority of the game to achieve a deserved win.

“We are changing to a couple of formations as we have some players who are very versatile,” he confirmed. “I would like to congratulate Cheikhou as we had a problem at right-back as Sam Byram was injured and Havard Nordtveit also not available.

“Michail Antonio has been so good up front with Andy, so Cheikhou, who is a player whose quality, physique and pace mean he can play in any position, stepped in and did brilliantly.”

West Ham will hope to close the gap on eighth-place West Bromwich Albion to two points when they host the Baggies at London Stadium next Saturday 11 February at 3pm.

Snodgrass: I’ve got so much more to give

Ashby: My debut was the best night of my life!