Hammers edged out by Newcastle at London Stadium 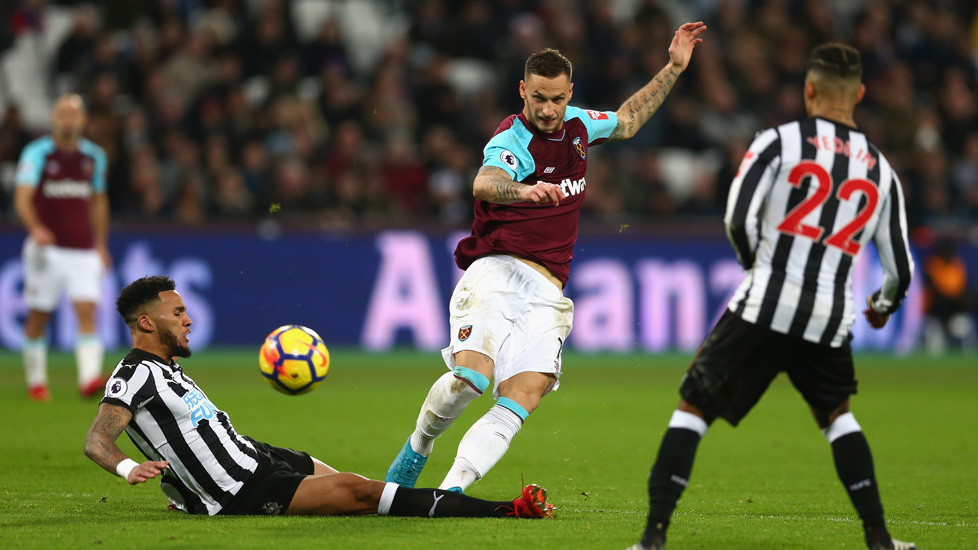 West Ham United saw a lead slip away as Newcastle United took all three points from London Stadium on Saturday.

Marko Arnautovic opened the scoring early on as the home side made the perfect start, but Newcastle soon struck back through Henri Saivet before moving in front after the interval thanks to close range goals from Mo Diame and Christian Atsu.

Between those strikes Andre Ayew had a penalty saved by Rob Elliot, and although Ayew later gave the Hammers hope with a close range finish, there was no third goal for the hosts as Newcastle held out for victory.

The afternoon started so well for the hosts as they hit the front with just six minutes on the clock. Saivet wore a guilty look on his face as he passed the ball straight to Arnautovic, who accepted the gift clinically, running at Ciaran Clark before slotting past Elliot,

However, the joy only lasted four minutes as Saivet atoned for his error at the first possible opportunity, arcing a free-kick into the bottom left hand corner of Adrian’s net after Winson Reid was penalised for a high foot.

With 17 minutes on the clock the Magpies so nearly added a second as DeAndre Yedlin was released by Matt Ritchie down the right. He cut back to Dwight Gayle and the Newcastle striker slammed an effort against the bar.

Arthur Masuaku forced Elliot into a save from range, but Newcastle were looking threatening down the right hand side through Yedlin and Ritchie’s link-up, and it was the latter who curled a beautiful left-footed effort against the upright on 34 minutes.

The game had an open feel to it and there was still time for the sides to exchange chances before the break, Michail Antonio glancing a header wide when well placed, and Gayle wasting a similarly promising opening following another Yedlin-Ritchie combination.

Another goal was coming, and it fell Newcastle’s way eight minutes after the restart through former Hammer Diame, who finished assuredly after Astu knocked the ball through Pablo Zabaleta’s legs and crossed low.

Three minutes later the Hammers were handed the opportunity to hit back from the spot when Clark felled Antonio as he burst into the box, but Ayew could not convert, seeing Elliot dive to the right to turn his penalty aside.

The breathless nature of the contest continued and Newcastle soon found themselves 3-1 up.

West Ham were the architects of their own downfall as Zabaleta and Masuaku failed to deal with a Newcastle clearance from Aaron Cresswell’s corner, allowing Joselu the space on the left to square for Atsu to knock home.

Attack looked to be the best form of defence and the Hammers were back in the contest 21 minutes from the end, Ayew finishing high into the net after Elliot blocked Andy Carroll’s header on the line.

Chicharito came on from the bench as the Hammers searched for a leveller, and Pedro Obiang fizzed a long-range effort over the bar, but the visitors stood firm to send the Hammers to a frustrating defeat.