Mark Noble is overjoyed by West Ham United’s derby victory against Chelsea and is hoping for a similar feeling after playing Arsenal later this week.

The Hammers claimed a 1-0 win against the Blues on Saturday thanks to an early strike from Marko Arnautovic, giving David Moyes his first victory as West Ham United manager.

The result has given Noble – who ran 12.9km in the contest at London Stadium – a huge smile that doesn’t look like fading anytime soon, and the captain wants the positivity to continue when the Irons play the Gunners on Wednesday.

It's always nice to go home with a smile on my face. I do like winning local derbies!

“It’s nice to go home with a smile on my face,” Noble told whufc.com. “I do like winning local derbies! Chelsea, Spurs, and we’ve got another one on Wednesday night [against Arsenal].”

Noble and his teammates put in an impressive performance to get the better of Antonio Conte’s Chelsea, with the away side limited to just two shots on target, both of which came in the first half.

The 30-year-old was thrilled with the defensive display of the team, having kept a clean sheet in the result. 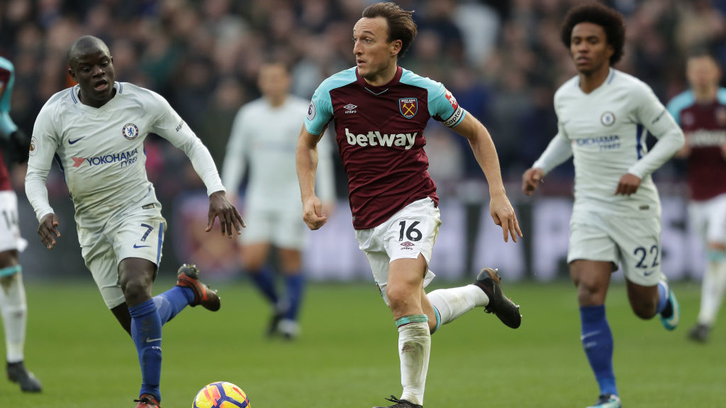 “You’ve got to realise that and you have to find a way to beat them. We found that way by defending, by counter-attacking and I don’t care if we defended for 90 minutes. We won the game.”

The skipper, who made his 298th Premier League appearance on Saturday, also took time to hail the loyal West Ham supporters for their role in the win over the Blues.

“The fans against Leicester, in the second half, took it upon themselves to create an atmosphere. At points versus Chelsea I was trying to take it upon myself to give the boys instructions on what to do but they couldn’t hear me because the crowd was so loud. I’d like that problem every week!”