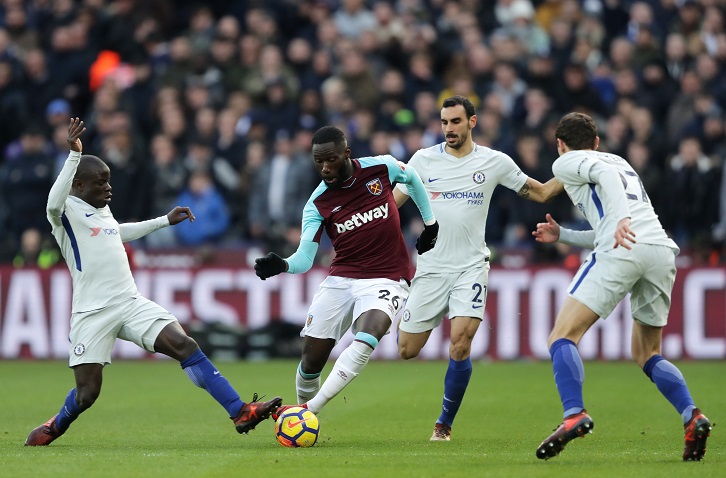 While West Ham United’s 1-0 Premier League win over Chelsea was undoubtedly based on a whole team effort, Arthur Masuaku produced one of the most eye-catching individual performances in London Stadium’s brief history.

The left wing-back was a jack of all trades on Saturday, repeatedly driving the Hammers forward in attack and helping his colleagues in defence whenever required.

With David Moyes’ side focusing nearly two-thirds of their play down the left flank, Masuaku was particularly to the fore, using his close control, pace and elusiveness to regularly skip past his man, drive into the final third and put Chelsea on the back foot. 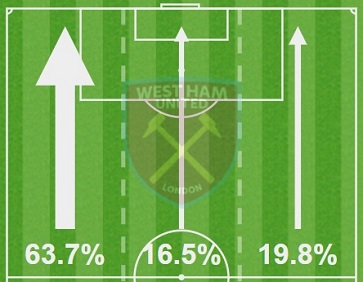 After the break, in particular, his defensive attributes were more apparent as West Ham successfully blunted Antonio Conte’s champions to record a first top-flight win and clean sheet in ten matches.

The No26 ran 10.39km in total at an average of 6.42km/h, placing him fifth in distance covered behind Mark Noble, Manuel Lanzini, Pedro Obiang and Pablo Zabaleta, making 41 sprints and reaching a top speed of 32.03km/h.

Technically, Masuaku completed just 24 of his 32 pass attempts, but 23 of those 32 attempts were made inside the Chelsea half, where space is at a premium.

It was when he chose to run at the Chelsea defence that he really took full effect. No player has completed more dribbles in a Premier League fixture this season than the 23-year-old’s eleven.

Time and time again, the Frenchman collected possession and his first thought was to get his head down and drive forward into space, repeatedly testing right wing-back Davide Zappacosta, his replacement Victor Moses and right centre-half Cesar Azpilicueta.

One such foray ended with a shot that zipped low and wide of Thibaut Courtois’ goal, while a succession of second-half dribbles relieved the growing pressure on the home defence. 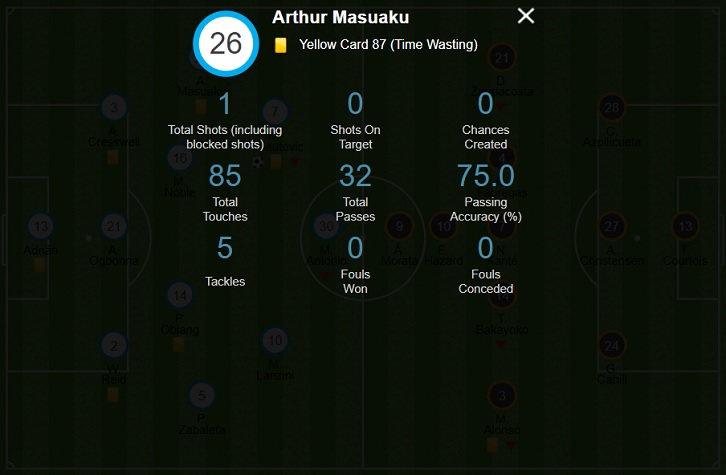 Like his compatriot Dimitri Payet before him, Masuaku has an ability to carry the ball out of danger and turn the game around on his own, flipping defence into attack in seconds.

Further, no West Ham player had more touches of the ball than Masuaku’s 85. In fact, it was not even close, with Lanzini a distant second with 63, and only two other Hammers touching the ball more than 50 times.

Just before half-time, the former Olympiacos player was central to a delightful passage of play featuring flicks, one-touch passing and movement that ended with a chorus of ‘Ole! Ole!’ from the Claret and Blue Army.

Defensively, he was also important, winning 16 of his 22 duels, making five clearances and two blocks, often doubling up with left centre-back Aaron Cresswell to stifle Chelsea’s attempts to break through the stubborn, compact and disciplined West Ham defence.

Moyes explained his decision to draft him into the team was based on Masuaku’s pace and ability to carry the ball forward.

On Saturday, against one of the best teams in Europe, he justified his manager’s decision fully. And then some.