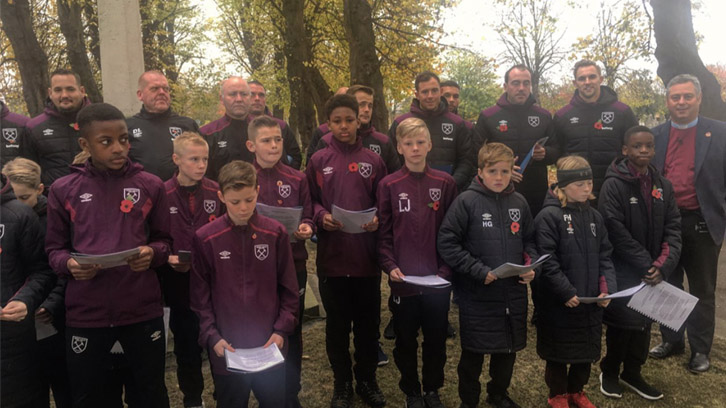 West Ham United’s U12s made the trip to Ypres, Belgium, on Thursday to take part in the Premier League’s Truce Tournament which is being held this weekend.

The tournament takes place every year to mark and remember the Christmas Day Truce which between Allied and German soldiers who famously played football in no man’s land during the First World War.

And the Hammers will be represented by an U12 team in Ypres for the second year running, having qualified for the competition last year as well.

This year’s qualification was different, for the Club, however; rather than win a qualifying match, the youngsters were rewarded with a spot at the tournament through their hard work and commitment in an education project surrounding the Battle of Passchendaele.

The two clubs who produced the best projects on the Battle which took place in the Belgian town over 100 years ago sealed spots for their teams to compete and alongside the Hammers, Middlesbrough also qualified.

Arsenal, Brighton and Hove Albion, Manchester City and Manchester United are the four other English clubs who will also be competing over the weekend.

Led by the Academy of Football’s Head of Education Oli Lethbridge, the youngsters organised a memorial service for two soldiers as part of the project; Stratford’s Walter Ellis and Robert Pilgrim Evans, from Coggeshall in Essex.

They also wrote letters and poems, produced an article for the Club’s Liverpool matchday programme, and scripted and featured in a video that was shared on the Club’s social media platforms (which can be viewed below).

Ahead of the tournament, Lethbridge said: “The boys, myself and the staff who are attending, are really looking forward to it, not just the footballing reasons, but actually for holistic development that is going to take place.

“We're fortunate enough that over the past few years the boys have been to the Truce tournament before.

“That's a really exciting opportunity for the boys, to go and meet other people in a similar position and in different cultures.

“Teams like PSG from France and Seattle Sounders from America will pose a different challenge on the pitch to them, which will give them an opportunity to problem solve in order to try and overcome those teams.

“The main thing they would have taken away, not just from the video but also the Remembrance service they organised was how important it is to remember the sacrifice many young soldiers made when they fought in the First World War. Subsequently, other wars since.”

In Ypres, the six English teams will face Paris Saint-Germain, last year’s champions Anderlecht, Club Brugge, Koln, Hertha Berlin, and Seattle Sounders. They each represent nations who fought on the fields of Belgium in the Great War.

At the tournament the education off the field will continue as the participating U12s get to see in person the scenes of the battles at which their ancestors fought a century ago.