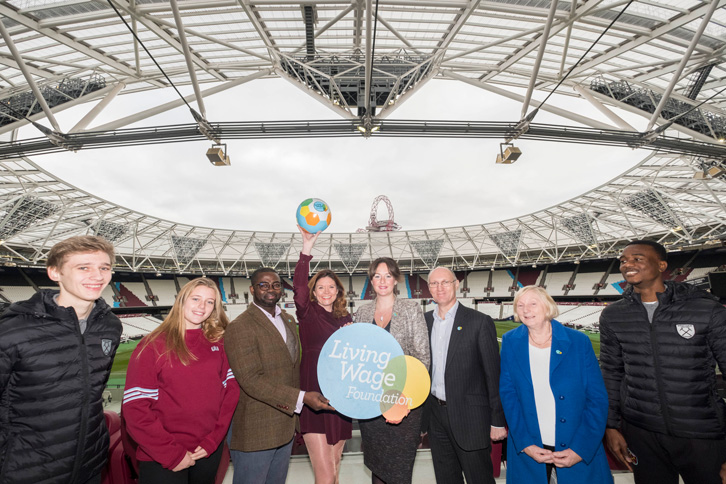 West Ham United has become an accredited London Living Wage payer at a ceremony at London Stadium this morning on Tuesday.

The Hammers become just the third Premier League club to be accredited by the Living Wage Foundation, after Chelsea and Everton.

The commitment sees everyone at West Ham United, regardless of whether they are direct employees or third party contracted staff, receive a minimum hourly rate of £10.20, significantly higher than the statutory minimum for over-25s of £7.50 per hour.

London Stadium’s owners have now committed to pay their employees the London Living Wage and are working on setting a timeline to uplift their staff’s wages, which means that West Ham United can now be officially accredited.

The Living Wage campaign is an independent movement that originates from east London, which is supported by businesses, organisations and people who believe 'a hard day's work deserves a fair day's pay'.

We are absolutely delighted to have secured the Living Wage Foundation’s seal of approval as an accredited London Living Wage employer, and hope to act as a good example for all other Premier League clubs and big businesses in London

The aim of the movement is to provide an ethical benchmark for responsible pay, and employers choose to pay the real Living Wage on a voluntary basis

The London Living Wage is independently calculated every year based on what employees and their families need to get by. The calculation is based on a social consensus of what people need for a decent standard of living and to participate fully in society, including things like housing, transport to work and heating, but also enough for small birthday celebration or a trip to the cinema.

West Ham United Vice-chairman Karren Brady said, “We are absolutely delighted to have secured the Living Wage Foundation’s seal of approval as an accredited London Living Wage employer, and hope to act as a good example for all other Premier League clubs and big businesses in London.

“The Living Wage Foundation accreditation is something we have been working towards for a long time, including lobbying the Mayor to help encourage our landlords to commit to paying a fair day’s pay, and we are over the moon to now be in a position where we can finally become a recognised Living Wage employer.

“The football club isn’t just made up of the eleven players on the pitch, and by making this commitment we hope to ensure that West Ham United continues be a place where the best talents want to ply their trade, and London Stadium, Rush Green and Chadwell Heath are environments in which they can achieve their goals.

"We recognise the contribution of each and every employee at the club, and rewarding and retaining our staff is a major part of that. We take pride in the way we conduct ourselves as an organisation on and off the pitch and by doing the right thing and paying the London Living Wage, we hope this will urge other clubs to soon follow suit.”

Katherine Chapman, Director of the Living Wage Foundation said, “We are delighted that West Ham United have become the third Premier League football club to sign up as an accredited Living Wage employer, ensuring that all their staff receive a real Living Wage that covers the cost of living. That’s a pay rise for almost 200 people, including cleaners and staff at their training facilities.

“The Living Wage badge is the mark of a responsible employer and West Ham United are joining a movement of over 3,700 employers across the UK who are making sure that all employees can live with dignity.